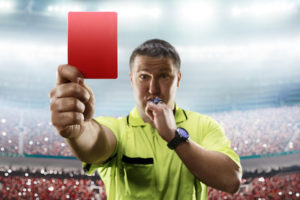 Football is a thrilling sport that can go from fantastic to calamitous in a matter of seconds, depending on which side you are supporting. Emotions often run high, and they can sometimes overflow… not (only) from the watching audience but also from the players themselves on the pitch.

There have been instances where football matches have had to be abandoned due to incidents or players seeing the red mist, where so many cards are given by the ref that the match is abandoned.

How Many Players are Needed for a Match to Continue?

For a professional match to continue, both sides must have at least seven players. That means that each side could receive four red cards each and still play. Five red cards for a particular team would lead to a match being abandoned. 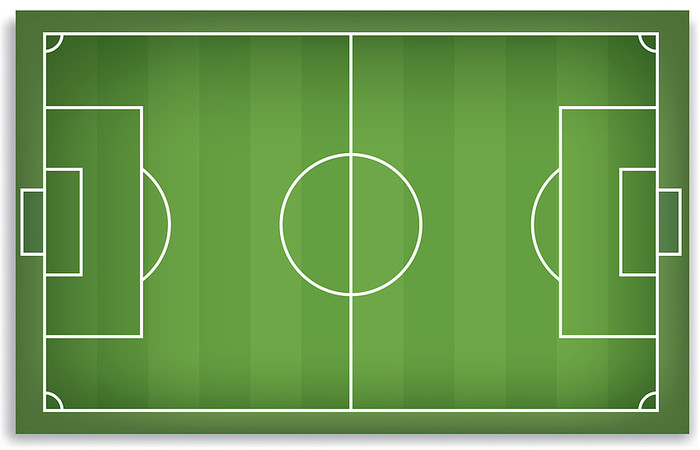 It is important to note that there are various stipulations on referees about when to dish out cards, be that red or yellow. But ultimately, according to the FIFA Laws of the Game, “The referee has the authority to take disciplinary sanctions from the moment he enters the field of play until he leaves the field of play after the final whistle.”

Sending-off offences include the following:

But, going back to the title of the article, how many players must have been given their marching orders before a game is abandoned by the referee? Looking at the FIFA rules, it states that “a match may not START if either team consists of fewer than seven players”. If a match is to continue, however, this is left at the discretion of member associations. They also add that is it “the opinion of the International FA Board” that a match should be abandoned if there are fewer than seven players on either of the sides.

Further guidance suggests that if a team has fewer than seven players because of players deliberately abandoning the game or leaving the field, that the referee is not obliged to stop the match immediately (e.g. in the middle of a passage of play) and “the advantage may be played”. In these circumstances, the referee must not allow the match to resume after the ball has gone out of play if one of the teams does not have at least seven players on the pitch.

Note that in general, if a match is abandoned, it is common practice for it to be replayed, but this will depend on the specific rules of the competition in question. Such rules might well include the provision to hand the victory to a team if the other side has been reduced to fewer than seven players due to red cards.

When Matches Have Been Abandoned Due To Red Cards 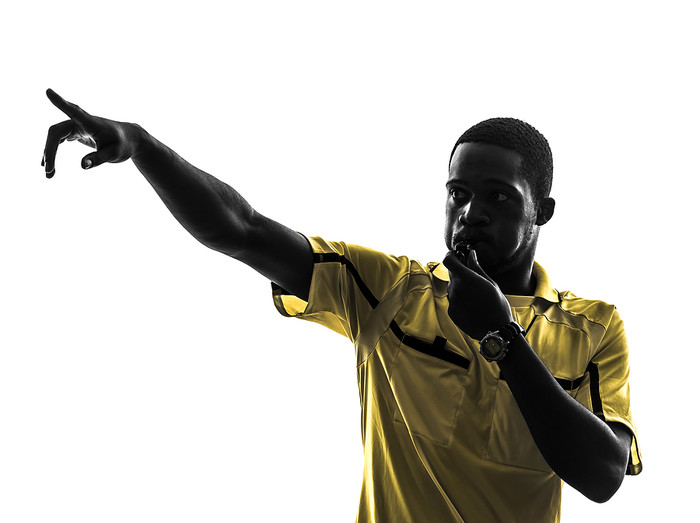 There have been various matches over the years that have had to be called off because too many red cards had been shown. Here are the most famous of them.

While this may appear to be more typical for a Sunday league club, matches have been in professional football because too many players had been sent off. This happened in February 2018 in Brazil, where a match had to be called off because one team was reduced to six players. The match between local rivals Vitoria and Bahia was a close one, with Bahia equalising from the penalty spot in the 50th minutes.

Following a lavish, large-scale celebration from Bahia, a fight broke out. This led to the referee handing out eight red cards, including three to players who were still on the subs’ bench at the time. With a further two red cards being shown to Vitoria players later on, thus reducing them to six players on the pitch, the ref had no choice but to end the local derby. As a result, Bahia were awarded a 3-0 victory.

Another South American example was in 2011, when the highest number of red cards ever was brandished. Again, at the heart of a local derby but this time in the fifth tier of Argentinian football. Claypole and Victoriano Arena were participating in the fixture in which two players were sent off before half time. The second half was much, much worse! The referee lost control of the heated contest and ended up sending off all 22 players and all the subs and coaches for good measure. A grand total of 36 red cards!

Getting a little closer to home and we’ll take a look at the only match in English football that has been abandoned due to too few players being on the pitch: The so-called Battle of Bramall Lane. It took place on 16th March 2002 between Sheffield United and West Bromich Albion in the First Division (as the second tier of English football was then known).

The game was tense from the start, with authorities having to take precautions to keep spectators from invading the pitch. Subsequently, just before the 10-minute mark, Sheffield United’s goalkeeper was sent off for handling the ball outside the penalty area and thus denying the Baggies a chance to score.

Sheffield United had another man sent off in the 65th minute after a harsh tackle. Following this dismissal, a scuffle developed, with another Sheffield United player being dismissed for a headbutt. The game devolved further into lunacy when United captain Keith Curle was fortunate to avoid a red card for seeming to punch a West Brom player. Two further injuries in the 79th and 82nd minutes meant that the game had to be abandoned as the home side only had six available players, having used all their substitutes.

Portugal v Netherlands (2006) – Most Cards Shown in an International

Although footballers are supposed to be professionals, it is crucial to remember that control can be lost even at the highest levels of competitive football on occasion. The Battle of Nuremburg, the moniker given to the 2006 World Cup match between Portugal and the Netherlands, was one of those occasions.

Proceedings started with a Van Bommel booking in the second minute of the round of 16 tie. A second yellow card was issued to a Netherlands player in the 7th minute and then there was one for a Portugal man just prior to Portugal’s goal in the 23rd minute. Portugal picked up their another booking before the break and then, in injury time at the end of the first half, Portugal’s Costinha fouled Philip Cocu and received his second booking, thus being the first player to see red during the game.

Things did not improve as the game entered the second half. Van Bronckhorst and Figo both had their names added to the referee’s book shortly after another booking for Portugal in the 50th minute. Khalid Boulahrouz, a Dutch defender, was given his marching orders in the 63rd minute, sparking a touchline brawl. Former Everton defender John Heitinga was fouled by Deco, who was cautioned for the offence. With the Netherlands not giving Portugal the ball back after they put it out as a player needed medical treatment, a scuffle ensued. This seen the Netherlands receive a further two yellow cards.

Portugal’s keeper also received a card, as well as the Portuguese left back for a rough tackle. Deco was then sent off on the 78th minute after time-wasting, following a foul Dutch player Cocu who escaped receiving a yellow card. Van Bronckhorst also saw red in injury time when he was sent off after the ref issued him with another booking.

There were four red cards and sixteen yellow cards issued during the game. And although the match did not need to be abandoned, this was a world record for the number of cards displayed in an international competition. Valentine Ivanov, the game’s referee, was later barred from officiating any further matches in the tournament. 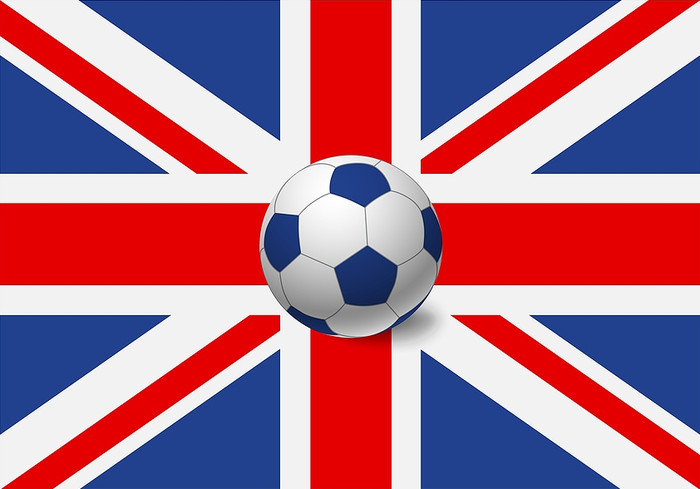 Aside from the Battle of Bramall Lane mentioned, there have been some other rather rowdy matches to have taken place back in the UK and we’ll check out some examples of games that have broken records for the number of red cards that have been shown.

The English record was set on 22nd February 1997 in the contest between Chesterfield and Plymouth Argyle. The game was dubbed the Battle of Saltergate (you might be noticing a theme to the nicknames these games earn!). This fixture saw five red cards being dealt out. The match was tense from the start. An Argyle player was sent off in the 36th minute for a reckless challenge on Chesterfield’s Chris Beaumont.

Plymouth led 2-1 going into the final minutes of the game before Chesterfield won a corner. A bad elbow to Argyle goalkeeper, former Liverpool star Bruce Grobbelaar, rendered him unconscious. This led to a mass brawl with players and even fans attempting to get involved. As a result, two Argyle players and two Chesterfield players were sent for an early bath, including future Bolton and England player Kevin Davies. Argyle held on for the win but both clubs were fined in the aftermath.

Bristol Rovers against Wigan was also a tense encounter that occurred 10 months after the Plymouth versus Chesterfield match. It took place in December 1997, and saw a record-equalling five red cards across the match. A Bristol Rovers defender was sent off for a second yellow card early in the first half, and a brawl near the goalmouth saw one Wigan player and two Bristol Rovers players sent off. All of this happened before the break. It would not be the last time the referee would slap a player with a red card, however. Rovers received another red card late in the second half as a result of a second booking.

It can therefore be said that Football is not always a game of respect, with teams sometimes losing it in the heat of the moment. It can obviously be argued that football is no longer as physical and assertive as it was in the past, with a greater onus placed on tactics and skill. But that does not mean that anomalies will not occur, with uncontrollable brawls on the pitch and hard two-footed tackles resulting in players seeing red with relative regularity.