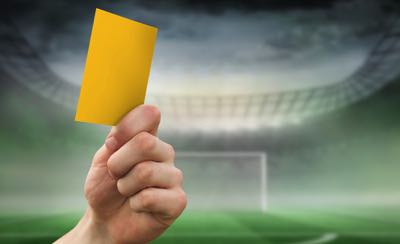 Fancy a flutter on the football but cannot quite decide which team will win? There is no need to worry as for many matches you will find a whole host of other markets that have nothing to do with the match outcome. There are options that relate to corners, penalties and even thrown-ins.

For this article, we are going to look at betting on bookings, specifically booking points. This is a fantastic market for whenever you have a hunch a game is either going to be a very clean and well-mannered one, or one that will descend into chaos with tackles flying in all over the place and the ref constantly reaching for their notebook.

Before we get started, it is worth mentioning that booking points is not the only way you can place a bet on the number of cards in a match. Some bookmakers will allow you to place a bet on over/under a specific number of cards, for example over 3.5 cards (as with over/under goals bets, half bookings are used to avoid ties or confusion). As this is much more self-explanatory though, it does not require any additional focus from us.

Thankfully, this is something of a universally accepted system, even at betting exchanges and spread betting companies, so you will not find that different bookmakers allocate a different number of points to cards. So, if you do tend to shop around, you are safe to assume that the bookie you settle on will be operating a 10/25 points system.

How Points Are Awarded

Another thing you will find common across bookmakers is how many points are awarded when a player is shown two yellow cards. Now, you may think the total answer is 45 (10 + 10 + 25), however, the second yellow card is not included in the booking points calculation. As a result, a player committing a second bookable offence will only score 25 points for their second transgression, on top of the 10 from their first, giving a total of 35.

Now you understand how to tally up the points, you are now in a position to place a bet. There are a few different ways a bookmaker may choose to run their booking points market but we have highlighted the most common options below.

One is to offer several points totals and then let punters bet on whether the amount will be reached (or exceeded). In this case the numbers listed are inclusive so if you bet on 30+ points and there was exactly 30 points, this is a winning bet.

Another option is to give three options all relating to the same points, either under, exactly or over. Usually, the amount specified is 40 points although it can vary by bookmaker and also by match. As in the example before, this relates to the combined booking points of both teams.

It is even possible at some bookmakers to bet on which team will amass the most points, rather than betting on specific amounts. Here this bookmaker has chosen to call the market ‘card index’ but this is the same as booking points.

These are just some of the main examples you are likely to come across. There are so many bookmakers and many do operate markets slightly differently. Some for instance will allow you to bet on the booking points total for an individual team, rather than a combined match total, though many of the best football betting sites allow you to choose from all these markets and indeed more.

On the flip side, there are some bookies that do not offer booking points markets. So, if this is a betting market you are really interested in, be sure to have a quick look before signing up and depositing your cash.

Factors to Consider When Placing a Booking Points Bet 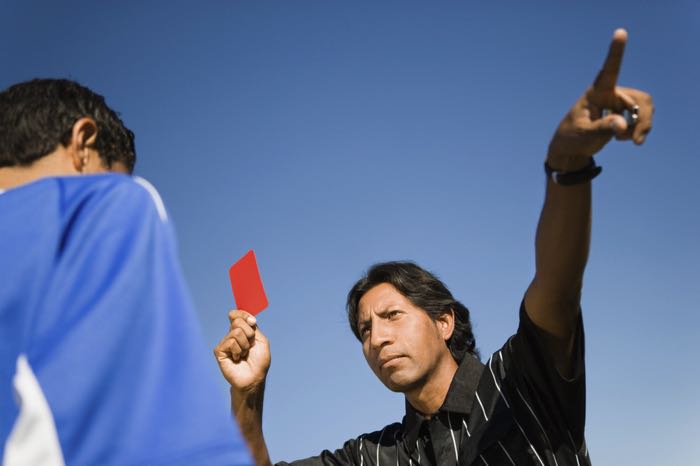 Now you know exactly how a booking points bet works, let us look at some factors you will want to consider before having a flutter in the market. Finding a value bet is never easy but by considering and assessing the following factors you’ll give yourself the best chance of beating the bookies when it comes to booking points betting.

Statistics will show you that some referees are simply stricter than others. Often we forget that the men (or women) in black are human like us, and as such, they perceive events in different ways. One foul might warrant a yellow from one ref but only be worthy of a warning from another. You also have some that are far more lenient when it comes to ignoring any foul language aimed their way.

Whatever the reasons though, the stats speak for themselves. Coming into the 2021/22 Premier League season, Mike Dean issued an average 3.92 cards per game across 535 matches. Lee Mason on the other hand posts a much lower 3.22 average after 289 appearances. If you are willing to include retired referees too you can find the likes of Mark Halsey down at a mere 2.36 cards a game. Those might not sound like big differences but in percentage terms it means that Dean dishes out around 70% more cards than Halsey did.

For bookings points, red cards are particular crucial though given their additional weight so it is also worth looking at who is more likely to brandish a red, not simply total cards. There can be big differences over large samples here too. Prior to the 2021/22 season you have for instance Mike Dean who issued a red every 9.39 games and Jonathan Moss who averaged one every 16.6 games, a huge difference.

Some players are magnets for cards whereas others will do all they can to avoid the book. Take two very different strikers in Kevin Davies and Gary Lineker. The former collected 130 cards over the space of 650 games while the latter went an entire 16-year career without a single one! With teams having different numbers of ‘dirty’ and ‘clean’ players, if we can be crudely binary for a moment, teams do amass varying amount of cards.

In the 2020/21 Premier League season, for example, Liverpool acquired 40 cards compared to 73 for Sheffield United. Do not think that better quality always equals fewer cards though as Manchester United were fourth highest on the list with 65 cards while Brighton were second to bottom with 51.

While club stats can be very useful, you need to be aware of the key individuals within the team who are responsible for bumping up these stats. To provide you with example, in 2020/21, Aston Villa’s John McGinn and Douglas Luiz amassed 20 yellow cards between them, almost a third of Villa’s league total. If you knew that both were injured and were to miss the upcoming match, suddenly betting on a high booking points game seems less appealing.

The Competition & Context of the Game

There are a few things to consider for this. Is the game you are looking at a meaningless end of season clash with little to play for or is it a must-win title decider? You might be right to assume that the higher the stakes, the more likely it is that there will be an increased incidence of foul play. Be wary of any competition though in which players are suspended for picking up a small number of yellow cards. Desperate not to miss a potentially big matches, players are likely to be on better behaviour as a result, particularly if they are already on a yellow card.

Another aspect to consider is if there is any rivalry or recent bitterness between the two teams. Derby matches often see things get heated, with the infamous ‘Battle of the Bridge’ in 2016 being a quite glorious, or rather infamous, example. After throwing away a 2-0 lead against Chelsea, the Tottenham players completely lost their cool with challenges flying in all over the shop. Incredibly Mark Clattenburg failed to send anyone off but he did issue 12 yellow cards with nine going the way of the north Londoners.

What Not to Consider 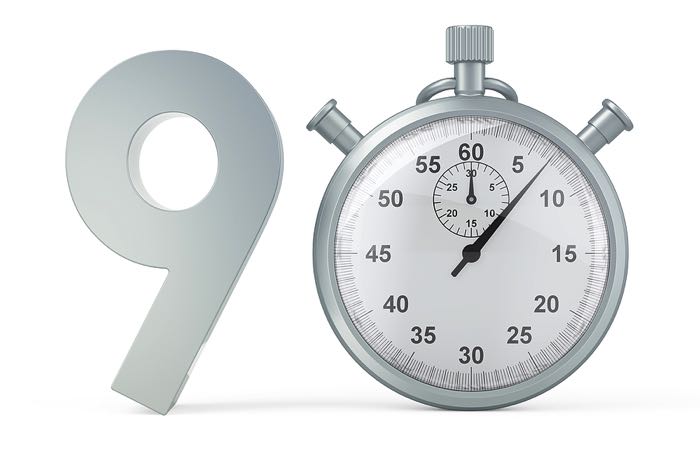 We have taken a look at the things you should consider when weighing up a booking points bet but how about things you are better off dismissing (forgive the pun)?

The Possibility of Extra Time

In common with the majority of football bets (unless stated), as standard, booking points wagers will only take into account cards collected within the standard 90 minutes (plus injury time). Cards collected in the 30-minute period of extra time following this will not count. So, if you think a knockout clash with no replay might end up all square after 90 minutes, do not let the possibility of extra time influence your bet.

For the purposes of betting points, only cards shown to players actively on the pitch will be counted. If a manager, other team official or substitute is shown a card, most likely for dissent or for starting a scrap by the side of the pitch, these will not count. As such, there is no possibility of some hot-headed manager giving you some nice additional points for being unable to keep their mouth shut.

Although there are definitely some exceptions to this (mainly local rivalries) we would say that head-to-head records are usually not a great indicator for predicting how many cards there will be in a match. The most previous meeting between two sides might potentially be of some value but if you start digging into matches 3/4/5+ seasons back so much will have changed since then. There are far more relevant statistics at your disposal rather than trying to rely on historical data, which you can easily draw misleading conclusions from.

Now you may think having VAR would result in more (red) cards as the cameras can pick up offences the referee has missed. While this does very occasionally happen, it is sufficiently rare that the use (or avoidance) of VAR should not influence your bet. It is also worth remembering VAR will not intervene with yellow card incidents even when the referee has awarded a second yellow (unless they believe the second yellow should be a straight red).

On a related note, booking points bets will be settled pretty much as soon as the 90 minutes is up. If a red card awarded during the game is rescinded days later, this will have no impact on the bet you made.