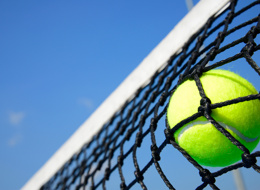 The level of competition at the top of tennis has been constantly rising over the past few years and the days of a Sampras or a McEnroe, or even a Federer or Nadal, dominating the field are past. For us this means a great spectacle but also more speculation about where we should put our money.

Here we take a look at three of the bookies offering the best odds and introductory deals for tennis, whether you want to put a safe bet on the early stages or back (just about) still British Andy Murray in the finals.

We’ll also give you a rundown on the basics of betting on tennis, the most common markets and how they work.

Best Bookmakers For Betting On Tennis

With a more limited set of outcomes than other popular sports, tennis can be a great money-maker if you know your stuff. Let’s see who’s offering the best odds in the business. 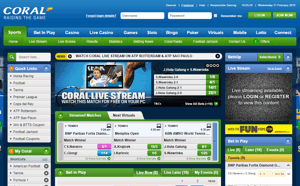 Another great option for betting on tennis is Coral, who have recently also launched a live-streaming feature. Coral also offer up to the minute in-play odds and have an easily navigable sports statistics feature, allowing you to browse by player or tournament.

What really makes Coral stand out is their “Specials” section which always gives great odds on novelty markets, for example “Murray not to win a Grand Slam in 2015” – a favourite of many English punters.

On top of this, only one ball has to be served for Coral to honour the result of a tennis match as valid. They are one of only a few bookies to be offering this and it means you don’t have to worry about your bet being voided when someone retires early with an injury (unless of course that happens to be your player).

As with most bookies, most promotions are offered around the Grand Slam tournaments, for example last year’s French Open had a very generous free bet offer. For all these reasons, Coral remains one of the most popular betting sites for tennis, with odds well above average and a wide range of markets covered. 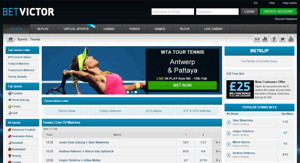 Another great option is BetVictor, a recent rebranding of VCBet (and before that Victor Chandler) and one of the oldest names in the business. Their website is easy to use across all platforms and the easy to use in-play betting console is a big selling point.

BetVictor has a very simple but effective and easy to navigate results service so you can quickly navigate by sport and event. In addition to this BetVictor’s odds are always among the best for tennis and they reportedly make the lowest margin on the sport of the three bookmakers reviewed here at just 5.3%.

Some great promotions are also on offer, for example in 2014 BetVictor paid out on all losing bets on the world number one Novak Djokovic when he went out of the French Open, so look out for this kind of offer for a no-risk, win-win situation. As with the other bookies, BetVictor don’t offer any ongoing tennis-focussed promotions but generally have something for most of the biggest events.

How To Bet On Tennis

Betting on tennis might seem simple, you pick a winner and that’s it right? Well it can be, but with as many as 20 in-play markets on a single game you probably want to explore your options a little more than that.

Here we’ll have a look at some of the most common markets and explain how they work. Obviously this list is far from exhaustive so you’ll probably want to check out one of the sites listed above for a more in-depth display of what’s on offer, particularly if your kind of bet falls into the “Specials” category.

If the last section made betting on tennis sound easy that’s because it is, but there are a few things to be aware of and whilst the rules are generally the same, some will vary from bookie to bookie so make sure you’re using a reliable one (such as our top three tennis bookies) and you know their rules before you place a bet. Here are some standards.