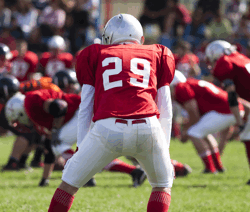 As American Football and particularly the NFL continues its rampant global expansion, sports fans in the UK are beginning to take more and more notice of it. It certainly helps that they’ve started hosting a selection of games at Wembley and if you’re willing to stay up late you can even catch the matches from the other side of the pond on TV.

Although it will probably never eclipse our domestic favourites of football (we mean real football!), rugby and cricket, the high intensity and levels of skill and athleticism in American Football make it a highly exciting game and more British sports fans than ever before are tuning in. As such the bookies are taking notice and there’s now a massive amount of money wagered and won on American Football in the UK.

Betting on American Football is not quite like betting on rugby or football and for those of us who didn’t even grow up with the game it can be overwhelming at first. In this guide we’ll run through some basics, reviewing three of the best bookmakers for betting on the sport as well as clarifying how some of the markets work and finally explaining some of the most common rules employed by bookies.

Here are the bookmakers we think are ahead of the game in their coverage, odds and promotions for American Football: 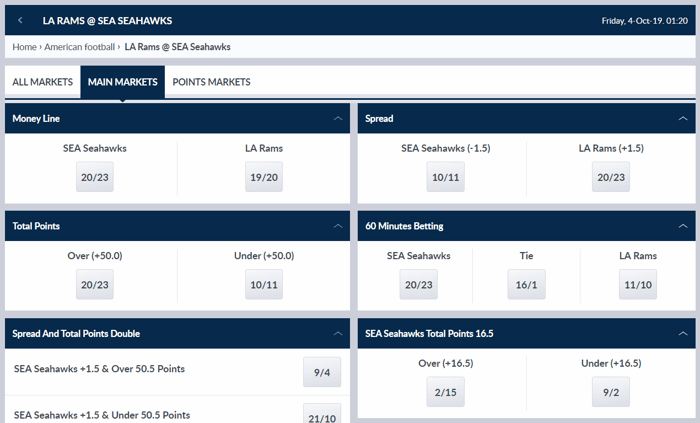 An old-school high street bookmaker that’s really made the jump into the 21st century, Coral’s website is attractive and colourful and more importantly informative and easy to use, they also offer a great range of markets and odds.

The stats radar which pops out when you click statistics in the navigation bar is very useful, allowing you to see the form of every team as well as their head-to-head history with whoever they’re matched with that week. Definitely worth checking out before you put your bet on.

A graphical Betting Highlights panel is also a nice addition, giving you a brief preview and summary of the odds on a game. You can also see which markets are most popular in the “Where’s The Money Going?” side panel although it’s not always the most popular bets which are the best ones. 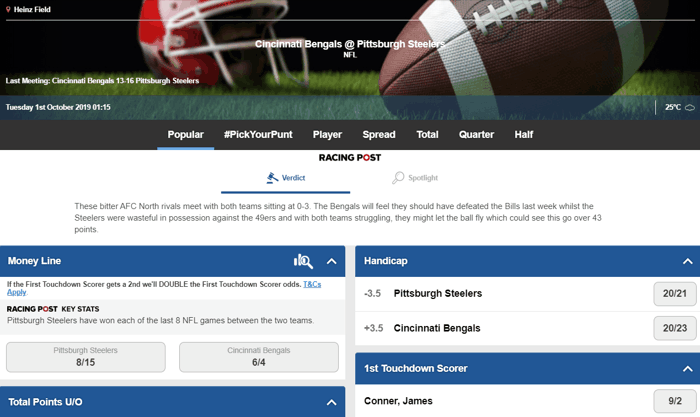 Betfred (well, owner Fred Done himself) is well known as the “Bonus King” and their American Football service lives up to this moniker. They offer competitive odds in a good range of markets and lead the field in promotions.

Although they don’t always offer quite the range of markets that our other two featured bookies do, Betfred are always offering great odds on the ones they’re in. Any quick odds comparison will show they are offering the best or close to the best odds in any given American Football market.

The website is very modern and stylish but a little annoying to navigate at times, especially on a smaller screen. This isn’t a problem for tablet or smartphone users though because the Mobile app fixes it and even on a smaller laptop it isn’t a major issue.

How To Bet On American Football

In this section we go over some markets and give some examples and explanations of how they work. We will also outline some of the rules which may affect your bets so it’s important to be aware of those.

There are many markets and combinations possible in American Football and we couldn’t possibly hope to go over all of them. Here are a some of the simplest and most popular:

As with all sports betting, the bookies aren’t trying to catch you out and the rules listed below will generally not come into play. That said, forewarned is forearmed and if you know about these rules now you can avoid unpleasant shocks later. 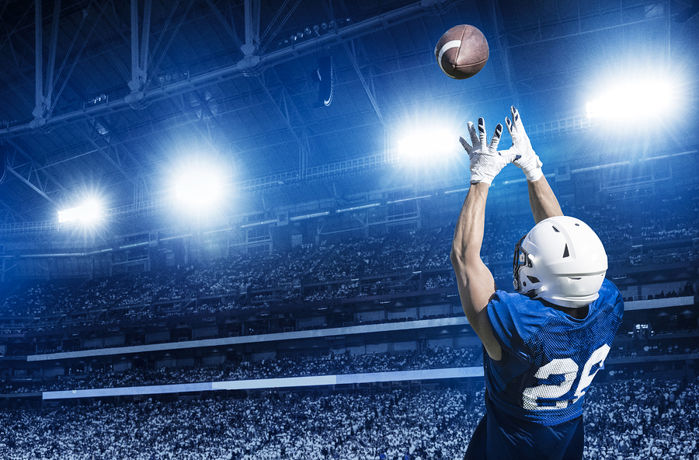 The Superbowl is not only one of the biggest sporting events in North America, but these days the popularity of the sport has mean that it’s now one of the most popular in the world. The competition has been running since 1967 and is the climax to the season for the NFL (National Football League). Whilst season games in the NFL take place in a league format, the Superbowl is a one off, winner takes all game and is played at a neutral venue usually on the first Sunday in February.

To get into the Superbowl, the teams must first work their way through a series of league games in the NFL and then through both conference and divisional knockout matches also. The leagues are split into two in the form of the NFL and the AFL, with the winners from each playing in the Superbowl.

Like all NFL games, the Superbowl does not warrant any tied games, meaning that overtime will be played until a winner is crowned. The winning team will pick up ‘Superbowl rings’ for their efforts and these winners items are widely thought of to be the crowning pinnacle of an American football players career.

The game will include a half-time show, which is often lead by one (or several) leading bands from the music industry and will be the second largest food consumption day in the US, only second to that of Thanksgiving. The adverts that are played during the game on TV are now regarded as part of the show from within the Superbowl, and it’s where companies will fight it out to gain some air time in what they know might be their biggest viewing figures of the year. Ads in the 60’s started from as little as $37,000, but now a 30 second slot will cost upwards of $5million, making it a pricey investment for most.