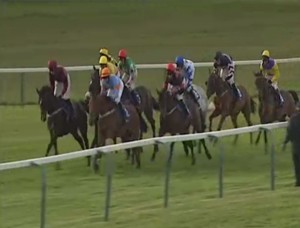 One of the main reasons people head down to the bookies when they fancy a flutter on the gee-gee’s is that the races are generally shown live in the betting shops – even when they aren’t being broadcast on regular TV.  But in this day and age of smart phones and internet wizardry, surely there’s a way to get it into your own home, right?

Darn tootin’, there is. Anyone can subscribe to the same channels that the bookies use and there are two – Racing UK and At The Races – that between them cover all the racing action that takes place in the UK. Of course that means paying for not one, but two subscriptions to specialist channels – which may be a little OTT if you’re planning on putting a 50p accumulator on the days races from Windsor.

Thankfully though, the bookies have thought of this and most (but not all) of the bigger UK names offer free live streaming of the races direct to your laptop, tablet or smartphone. This service is usually completely free, although you normally will need to have placed a bet on the race to be able to watch it – and this is where the betting sites start to differ as each has their own conditions and minimums.

To make your life a little easier we’ve come up with a handy table of UK online betting sites that offer live streaming horse racing, along with the minimum bet required to watch a race. Unless otherwise stated all of the bookies in the table offer streams from both RUK and ATR, meaning they have full coverage of all UK races.

As you can probably see from the table, the best place to watch horse racing for smaller penny bets (ie: those under £1) is Betfair who have the lowest minimum bet of just 50p. If you’re planning on betting £1 or more, then it doesn’t really matter which bookmaker you visit as they all offer the exact same streams for the same minimums, so just pick your normal favourite.

In most cases that’s where the bookies stop in terms of live streaming with the exception of a small handful of sites such as Betfair who also offer free streams of other sports – including football, tennis, golf, volleyball and so on. Having said this, they only tend to cover the lower interest matches as the big games tend to have exclusive rights sold to the highest bidder (eg: Sky Sports) – so you aren’t, for example, going to be able to watch the Champions League Final through their service.

Here are a couple of screenshots of what you can expect to see when watching on your computer. We’ve found the quality to be pretty representative of what you’ll find at most bookies. There’s also little difference between desktop and mobile viewing, provided you have a strong internet connection.

If you do have a slower connection you may see the race in a lower resolution, or even with a slight delay as you wait for your phone to load the race. So generally speaking it’s best to use wifi when streaming to your phone rather than 3G (or even 4G).