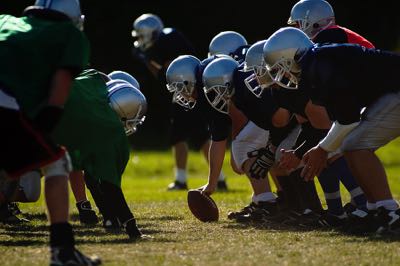 American Football can be a complex game but this article attempts to break down the differences as to how passing and receiving yards are evaluated, as well as explaining the different types of bets that can be placed when looking specifically at passing and receiving yards. To begin with, let’s quickly take a look at how the concept of American Football works. 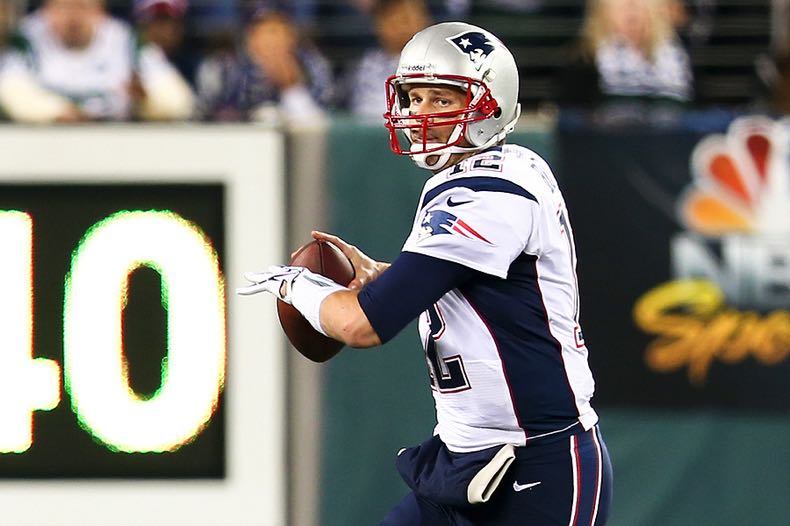 Unlike almost any other sport on the entire planet, a professional American Football team is comprised of three separate units, an offensive team, a defensive team and a special teams unit. Although some players in the past have played on both the offence and the defence it’s pretty rare to see. A player’s role on the team will likely fall under just one of those categories. The job of each of the three units is pretty simple with the offence’s main role trying to score points, the defence’s main objective is to stop points from being scored and special teams carry out plays like the kickoff and field goals.

Quarterback Moves the Ball Up & Down the Field

For every completed pass that a quarterback makes, he will receive yardage stats for that throw. The length of the playing area on an American Football pitch is 100 yards and each side of territory is divided out into two sides of fifty yards. When a team receives the ball they usually start at their own 25-yard line – meaning that they need to progress 75 yards to score a touchdown.

They will have a series of downs to achieve their objective of proceeding 75 yards. A team must advance at least ten yards to keep the ball and they have four attempts to try and do this. If they achieve their ten yards, the attacking team will then get a fresh set of downs where they will try and advance the ball at least another ten yards. If they fail and struggle to move anywhere or can’t reach the minimum ten yards, the team will either punt the ball to the opposition, kick a field goal or give the ball to the opponents.

Example of a Game with Yards Received

With that out the way – let’s now talk about yards. So, our team has the ball and we are starting on our 25-yard line. The first play is a pass and the quarterback manages to throw the ball ten yards and the wide receiver who has caught the ball is immediately tackled. We have enough for a new set of downs and the quarterback and wide receiver who caught the ball will have both received ten yards to their stat sheet.

The next play is another throw and this time it’s a short slant throw that only goes five yards. Again, the quarterback and receiver who caught the ball will be attributed with another five yards that will get logged in the stat sheet. We have now moved the ball 15 yards and have progressed to our forty-yard line. The next play is a successful throw of twenty yards but the receiver does a great job and after he has caught the ball, manages to run for another twenty yards. In total, we have moved forty yards and are now at our opponent’s twenty-yard line.

The receiver will have just logged another forty yards for their stat sheet. They would have received twenty for the catch as they caught the ball twenty yards upfield from where the ball was originally started, they will then get a further twenty yards added as when they caught the ball they managed to run for yet another twenty yards. The quarterback will also have every yard of the play logged so will also have notched another forty yards to their stat sheet as the receiver advanced the ball off the quarterback’s pass.

Our team is now in reach of the opponent’s end zone by being at their twenty-yard line. The quarterback manages to throw a pass into the end zone which is caught by a receiver, this will tack on another twenty yards to the stat sheet. In total, the quarterback would have just logged seventy-five passing yards – on a team, there are eleven players on the field who attack and defend. With regards to who can catch the ball, at least five of these players are offensive linesmen whose job is to stop the defenders from hitting or tackling their quarterback. The quarterback can’t throw the ball to himself so this leaves five players able to catch the ball. These five players are normally a mixture of wide receivers and tight ends although it is also possible to also throw it to a running back. Whereas the quarterback gets passing yards for every throw he completes, the player will only get receiving yards for the plays where they catch the ball. At the end of a game, it isn’t uncommon for the quarterback to have thrown the ball to at least six or seven different receivers.

There are instances in the game where the quarterback has only thrown the ball a short distance and the receiver makes an amazing play and advances the ball up the field through their skill. As stated earlier the quarterback gets any extra yards logged that the receiver advances. To help distinguish the different types of play. The receiver benefits from an additional stat line, which is called yards after catch or YAC. This stat line is purely for the receivers and it will log how many yards they were able to accrue once they had caught the ball.

In summary, a passing yard is any yard that is registered through the act of the ball being caught. Only a quarterback will accrue passing yards. Receiving yards are yards attributed to receivers who catch the ball. Yards are logged in terms of how far the ball has advanced in the air to the point of reception as well as any yards the receiver makes once the ball is caught. 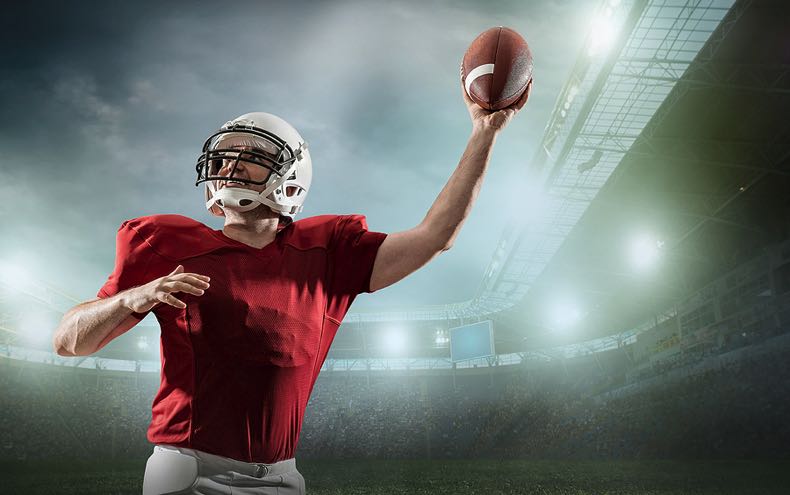 Passing and receiving is a major cornerstone of American football and, as you can imagine, there are a plethora of bets that can be placed linked to the pair.

A common bet that can be placed is whether a quarterback will be able to throw the ball over or under a certain amount of yards. It isn’t uncommon for quarterbacks in the NFL to throw for well over 300 yards and in the instance of this bet, there will be a variety of different options that a bettor can pick from. The sportsbook might offer over or under milestones such as 250 yards, 300 yards, 350 yards and 400 yards.

It’s important to understand what sort of offence a team runs before backing a bet like this. Some teams love to throw the ball and in this instance betting the over on the bigger numbers will make sense, other teams like to run the ball and this will result in fewer overall passing and receiving yards. It’s important you try and understand what each team tries to do offensively so that you can make smarter bets.

When it comes to receiving, there are also similar bets to be made. As we stated above there will be many different receivers who will be eligible to catch passes. Bettors will often be able to predict whether a certain player will be able to receive over or under a certain amount of yards. To give you a barometer, if a player can earn over 100 receiving yards this is considered a great game by that receiver. Often the over or under mark is around the 75 yard total and it’s your job to predict whether the player will surpass the total or not.

Other bets can be placed which ask bettors to predict whether a quarterback will throw for a certain amount of yards in any given half or quarter. For example, a bettor can predict whether the quarterback will throw for over 100 yards in the fourth quarter or throw for over 200 yards in the second half. The form of the team should be greatly considered when making these specific types of bets. If the team you are backing is likely to win, as the game goes on they might start throwing the ball less to milk the clock and preserve a lead. If a team is likely to be losing they will be looking for quick scores which will involve them throwing the ball multiple times.

Which Half Might See Largest Amount of Receiving Yards

Similarly to the above, you can predict what half might see the largest amount of receiving yards or more specifically back whether there will be a certain play in the game over a certain amount of yards. For example you could predict whether one play will see over 60 yards received. In this type of bet you are hoping the quarterback makes a huge throw or the receiver is able to advance the ball up the field by making a great play.

The final sort of prop bets that can be made available to bettors is whether a receiver might make over or under a certain amount of catches. For example, will a receiver make over or under five catches? Again, it’s important to look at teams attacking patterns when backing a bet like this. A bettor needs to consider whether a quarterback likes to spread the ball around or whether they have a favourite target. If the quarterback throws to multiple targets every game it’s unlikely that a bet like this will come in – however, if the team has a clear standout receiver then a bet like this makes a lot of sense. 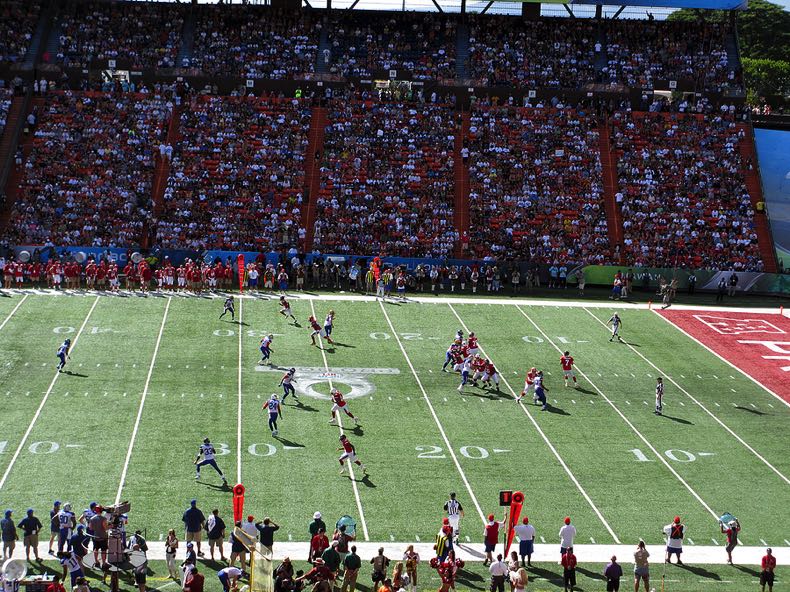 We hope that this article has clarified the difference between passing and receiving yards as well as define the different types of bets you can make that are connected to both. The NFL through the decades has evolved emphatically. Gone are the days when teams looked to mercilessly run the ball play after play, instead the league has now become a quarterback league and teams are looking to pass the ball as often as they can.

It isn’t uncommon to see quarterbacks throw for well over 400 yards in a game and for games to exceed upwards of 60 points. The league has become about explosive plays with quarterbacks encouraged to throw the ball downfield as often as they can. With the NFL season just ending it will be some time before the next round of matches take place, however when they do make sure you investigate the passing and receiving markets as there is real value to be found.