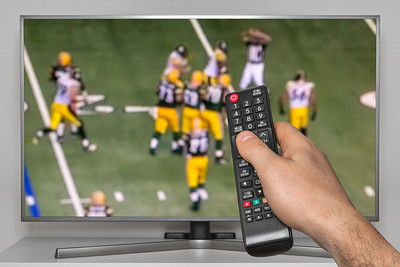 For those new to the world of American football, there are plenty of rules and words to get your head around and that’s before you even get to the tactics and subtleties. Whether it’s downs, sacks, field goals or something else, it will take you a little while before you understand all the terminology and how the game works. This is not the end of it though because the sport of American football also has very specific rules when it comes to television adverts.

Critics of the game often say American football features too many commercials and this is something that ruins the flow the game. While you may have read this before yourself, it is worth asking the question how much adverts actually impact a typical American football match, with particular focus on the NFL.

Adverts – Why Such A Big Deal? 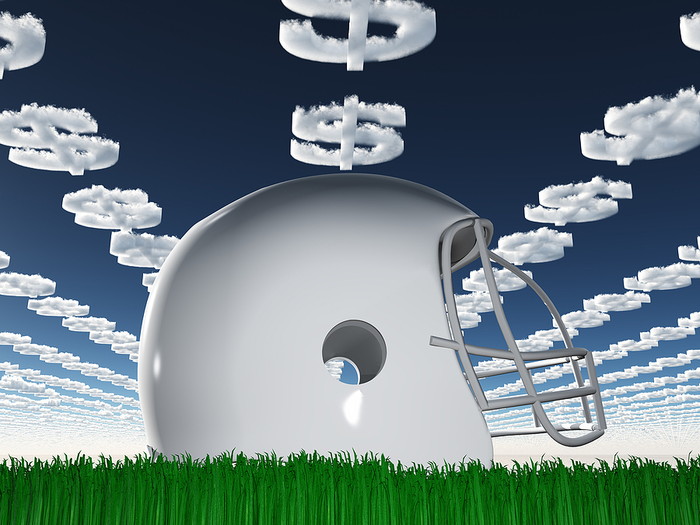 In many ways American football is not too different from many other popular sports in that you have league organisations trying to generate as much revenue as possible. The English Premier League for instance sells rights to air its football matches in packages worth billions of pounds. The French top-flight even agreed to a €15m-a-season deal to be branded ‘Ligue 1 Uber Eats’, presumably as this was the best offer they received. Although both these examples relate to football, you can just as easily see other instances in golf, basketball, rugby and more or less any sport you care to mention.

American football does rather take it to the next level though when it comes to maximising revenue. One of the main ways of achieving this is by selling an abundance of commercial slots during matches. With the high viewership the sport gets, companies pay very good money indeed for these in-game slots. The 2020/21 season brought in TV ad sales worth in excess of $3.5bn for the NFL TV’s partners and this excludes the extremely lucrative Super Bowl. For a sport that only featured 124 matches in this time frame (compared to say, 380 for English Premier League football) this is a quite astronomical fee.

In return for their money, companies get a lot of eyes watching their adverts. Average NFL viewership for the regular 2021/22 season came in at a whopping 17.1m. This was sufficient pull for the league to attract a total of 41 corporate sponsors, something that really helps keep that cash pouring in.

How Many Adverts Per Game?

Okay so we have established that there are a lot of sponsors that pay big money for time on-air but just how many commercial breaks are there? Precise regulations vary year on year but you should expect a bare minimum of sixteen breaks, with eight featuring each half. Should the game run to overtime, there will often be no additional breaks as usually the TV networks are wanting to get the game finished as soon as possible to minimise schedule disruption. Additionally, it is difficult to sell adverts for a slot that is unlikely to exist, although such deals have occurred occasionally in the past.

As mentioned above, the number of advert breaks does vary depending on what mood the NFL happens to be in. Before the end of the 2017 season, each NFL match typically saw 21 ad breaks, five in each quarter except for the second quarter which featured six. To appease the growing discontent of fans, they reduced this number to 16, which was unanimously welcomed, but the change did not have a big impact on total commercial time. This is because rather than each break being 1 minute 50 seconds, breaks were extended by 30 seconds, making them 2 minutes and 20 seconds long. So, what was previously 38.5 minutes of TV ads in total, only came down to 37.3 minutes, so hardly much of an improvement!

It should be stressed that we are on talking about in-game adverts here, so not any pre- or post-game ones, nor those during the 12-minute half-time break. These are just breaks you see during the action, a sight you never normally see in many other team sports. It has also been known for the NFL to sell additional ad time mid-way through the season, as they did prior to the 2021 play-off matches. So, to summarise things incredibly briefly, you can be sure that any NFL game will see a lot of commercial breaks.

While many fans continue to complain about the presence of adverts in NFL matches, the league shows very little sign of overhauling the system. A detailed report from FiveThirtyEight looked at one NFC (one of the two NFL divisions) match hosted by Fox and found there were over 20 commercial breaks. The entire broadcast lasted for 3 hours 15 minutes but of this, a mere 18 minutes was actual ‘football’. The remaining time was split between commercials (49.9 minutes) and non-action (140.5) minutes.

Are Games Stopped For Adverts? 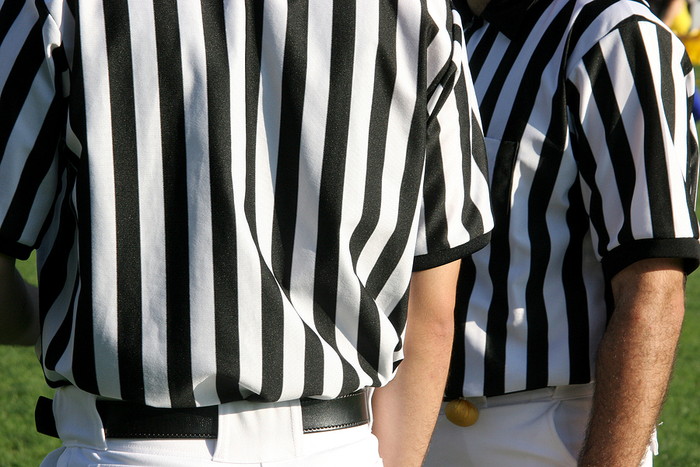 It would be wrong to say the American football is ‘stopped’ for the sake of adverts. This is because breaks only commence when there has been a natural stoppage in play. Broadcasting mistakes can happen where the channel cuts to the advert at the wrong time but in general you should never expect a situation where the quarterback has the ball in his hand and before he launches it the picture skips to an advert. American football is advert-intense but not so much so that it will deny you any part of the 15 or so minutes the ball is actually in play.

Instead, what happens is natural pauses end up being extended for the sake of adverts. Numerous breaks can be taken advantage of in this way, whether it’s the gap following a turnover, kick-off, score, or an instant replay stoppage. Timeouts can also be extended from the usual 30 seconds when called by either coach. For this to happen the network just need to signal they wish for the timeout to be used for a commercial break, extending the timeout to around two minutes. Only when all the commercial breaks for that quarter or half have been used will the referee instead declare a regular 30-second timeout.

Are all Games the Same?

It should also be noted that there is not a fixed pattern networks will follow when it comes to timing their ad breaks as it can depend on several factors including other matches happening elsewhere. If there are two matches on, and the other is running a little late, the network will delay the commercial breaks for the late-running contest. They do this because they know many people will swap over to this game following the conclusion of the earlier finishing match. As a result, more people will end up seeing the commercials. So, there is something of a skill to knowing which breaks to take advantage of are as there are so many to choose from in a typical game of American football.

There are some regular ad-break slots though, these being at the end of the first and third quarters and you will normally see another commercial break following the two-minute warning in the second and fourth quarters. Outside of this though and random breaks in play will be utilised for the purposes of ads. One thing networks do avoid now though is having a break either side of a kick-off as this is seen as breaking up the play too much, even by NFL standards. Sandwiching ad-breaks in such as way is referred to as a ‘double-up’ and they are exceedingly unpopular among spectators.

With the TV networks effectively dictating when play can resume, how do the players know when to get started again? For this they need to cast their attention to the man on the touchline wearing the orange sleeves. Although they will be donning a rather odd-looking outfit, they have a very important role to play as the network television coordinator and they regularly communicate with the pitch-side television coordinator during the game. To signal a commercial break is desired, the man with the orange sleeves will usually cross his arms and then when the break begins an arm will go behind his back. This will allow staff in the radio booth to see that the break has started.

If you end up watching an American football game live, this is how you will know the match is being paused for the sake of a commercial break. It is difficult to measure exactly how long adverts increase the broadcasting time of a live NFL match, given that many stoppages would exist anyway but it is certainly a sizeable amount.

As well as formal ad breaks that take you completely away from the stadium, this is not the only corporate involvement you may find in an American football match. There can be split-screen adverts that continue to show the footage while also showing a few words from one advertiser or key sponsor. Additionally, certain match events or awards will frequently come with a sponsored name and you can be sure that commentators will not forget to use them. It is a sport where the powers of capitalism are in full force but sadly, we would argue this is to the detriment of the fans. 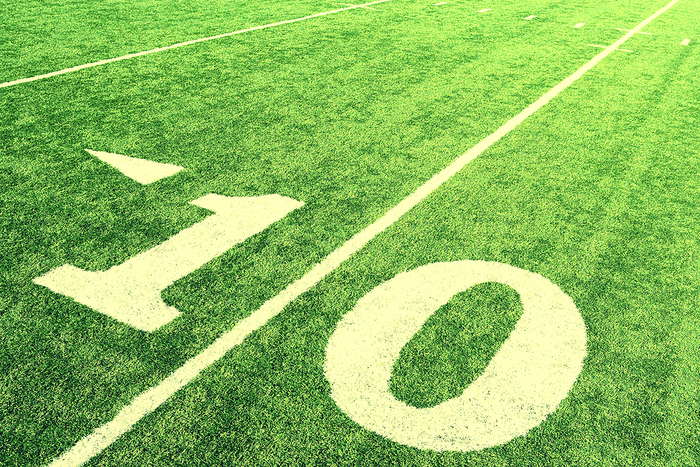 As American football coverage is incredibly ad-heavy usually, the NFL Red Zone is quite an unusual additional to the sport. With this channel, viewers can enjoy action from all the games taking place on Sunday during the regular season. It features ‘whip around’ simulcast coverage meaning you can see every touchdown from every game playing on the day. This in itself is not that unusual but the fact that this is a commercial-free service, or largely commercial free, very much is. When the Red Zone’s featured football match pauses for an ad-break, they simply switch their focus to another match rather than pause themselves.

If all the matches happen to be breaking for adverts, which is not unheard of, the footage will usually cut back to the studio for a brief word or highlights of other matches. Naturally such a service comes at an additional cost but for many it is worth it simply to avoid the excessive number of ads they would normally endure. It has actually been estimated that a typical NFL fan will watch a day’s worth of commercials each season, and this does not even include the play-offs.

Will In-Game Ads Spread To Other Sports? 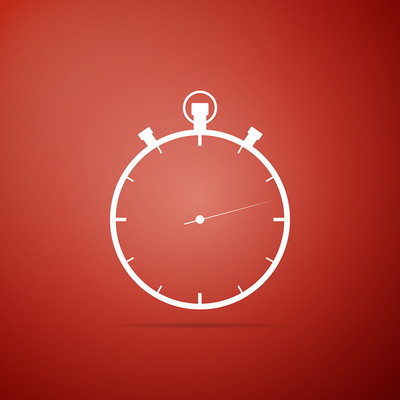 There is no denying that selling so much prime ad time is great for revenue so there might be a temptation among some sporting executives to follow suit. NHL already sees its fair share of ads with three breaks featuring in each quarter, of two minutes in length.

There does seem to be a greater sense of opposition towards numerous in-game breaks across the Atlantic though. Any such proposals in much of Europe, across virtually any sports, would be met with fierce and widespread discontent and so, are unlikely to be explored. Instead, other sports are likely to stick to more culturally ‘acceptable’ revenue streams such as sponsored league names or advertising boards on the side of the pitch. That said, money doesn’t so much talk as shout, so never say never.