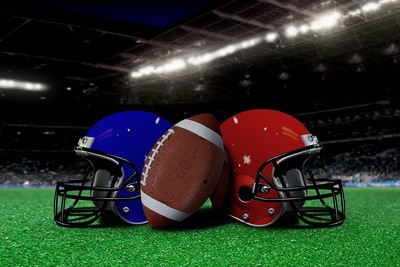 Americans often lament that cricket is a strange sport because a game can last for five days and still not deliver an actual winner. They also point to football and wonder how a sport where around one in 12 games see neither side score and around 30% end in a draw can be quite so popular as it is.

In short, American fans are not overly keen on the concept of not having a winner. It is beyond our remit to question the deep social and psychological forces at play here and their relevance to the American Dream and how the US has thrived economically but it might perhaps give us a clue to the issue of whether or not American football matches can end in a draw or a tie.

Can There be a Tie in the NFL?

Yes, although rare, there can be a tie in regular season NFL games if the scores are still level following one period of overtime (OT). Prior to 1974, there was no overtime played in the NFL so drawn matches were more frequent, averaging just under five per season.

In the playoffs additional overtime periods are played until there is a winner meaning there cannot be a tie in these games.

When Are There Draws In The NFL?

First, we should note that unlike cricket and certain other sports, there is no difference between a tie and a draw in American football. Technically games that end level are ties but you may see them called draws. In addition, for the purposes of this piece we are talking about the National Football League (NFL), which is by far the sport’s biggest league and for many, certainly in the UK, is the only American football they will ever watch.

For a fairly long period, games could indeed end in a tie and it was not an especially uncommon result. Between 1920 and 1973 there were 258 ties in the NFL, however for the 1974 season overtime (like extra time in football) was extended to include regular season games, rather than just matches in the play-offs. 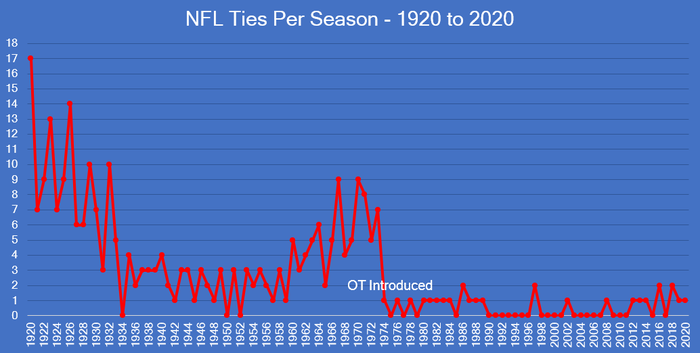 This dramatically reduced the number of tied games, with a 15-minute period of sudden death overtime being used to separate teams that ended level after the fourth quarter. If neither side was able to score during those 15 minutes, only then would the game be declared a tie. In 2012 there was a minor tweak to the overtime rules that meant they were no longer wholly sudden death but a more significant change came in 2017 when the overtime period was reduced to 10 minutes for the regular season. This was partly to reduce the risk of injury to fatigued players.

There have been 26 tied games between 1974 and 2020, so whilst a tie can occur, it is certainly a highly unlikely outcome. Since overtime was brought in for regular season clashes there have been several seasons with no ties at all and, for example, in 2020 the only tie came between the Cincinnati Bengals and Philadelphia Eagles (23-23).

Are There Ties In The NFL Playoffs? 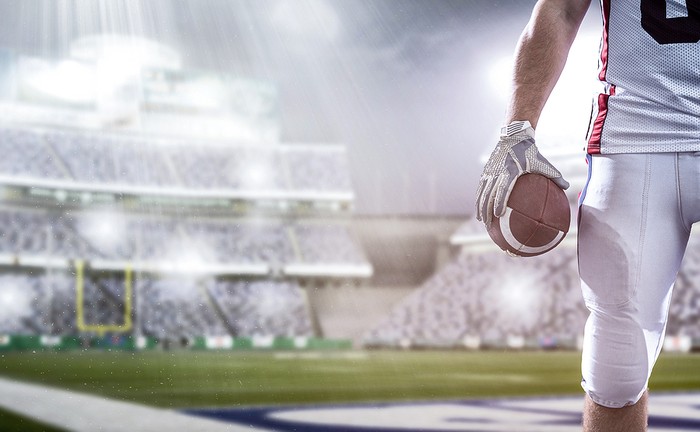 Whilst pre-season games and matches during the regular season can end in a tie, once we reach the post-season, ties are entirely off the menu. The NFL’s official overtime rules state that “If the score is still tied at the end of an overtime period — or if the second team’s initial possession has not ended — the teams will play another overtime period. Play will continue regardless of how many overtime periods are needed for a winner to be determined.”

In the same way that cup competitions such as the football, cricket and rugby World Cups have methods of separating teams in their knockout phases, the NFL uses overtime to ensure that there is always a winner and a side through to the next round. In short, to reiterate, this means that there can never be a tie in the post-season.

Can You Bet On A Tie? 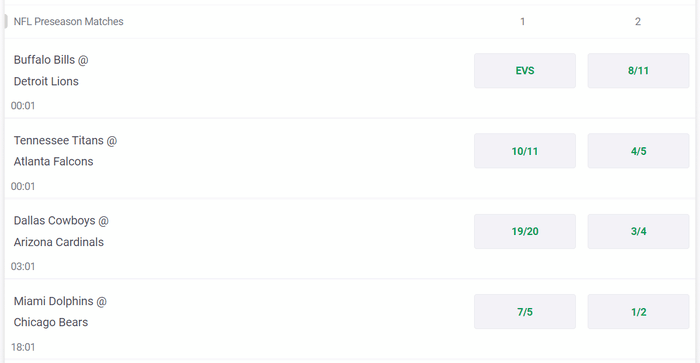 With many US sports, including American football, betting on who will win the match, often called the moneyline, is not a hugely popular option anyway. It is far more common to bet on the spread, which is effectively a handicap market and usually removes the possibility of a tie in any case by offering half-point handicap totals. For example, one might back the Chicago Bears +6.5.

If you do decide to bet on the moneyline, the tie will not be offered as standard, simply because it is such a rare occurrence. Therefore all normal moneyline bets will be settled in accordance with the result as decided by overtime (where needed). This means NFL betting is much closer to white ball cricket tournaments than it is to football (soccer), bets on the former being settled according to the official winner, bets on the latter according to results after 90 minutes (plus injury time).

Should a regular season game end in a tie, even after the designated overtime period, most bookies will settle any relevant bets (including the moneyline) as a push. This is akin to a void bet, meaning you get your stake back. This will only be the case where the tie was not directly offered as an outcome and if you have any doubts ask the bookie’s customer support staff or check their American football rules.

Some NFL betting sites may have a separate market for the tie so if you really want to bet on the game being level this is worth checking for. In post-season matches, where an official tie is an impossibility, this will mean a tie after normal time. However, should you find a specials market offering a tie for a regular season clash you should check whether this includes overtime or not.

In the era of overtime, ties have been relatively thin on the ground, as we have seen. Even so, some of these games that have ended without the franchises being separated have been noteworthy for a range of reasons. Here are some of American football’s classic, often record-breaking, tied games: