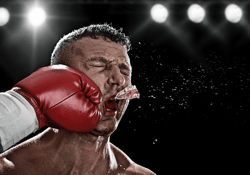 For those into combat sport there are now a wealth of options, with the fast-growing MMA, Judo and Ju-Jitsu to name just three, but nothing beats a good old fashioned boxing match. There is also nothing simpler to bet on – just pick your fighter and if they win you do. Obviously there can be more to it than that if you want there to, but at its very basic level boxing is almost designed to be bet on which in part explains why it is such a popular sport when it comes to betting.

Everyone know the stereotype from films like Snatch or Pulp Fiction, of a corrupt fight organiser who makes his money from rigged betting and there has certainly been some truth to it in the history of the sport. However, it’s definitely been cleaned up a lot in recent years, especially at the higher levels where the money available through fair means offers less incentive for fighters to cheat, and you can be sure when you bet on a big fight that both men will be doing their best to knock each other out these days.

In this guide then we’ll be looking at the three bookmakers most worthy of taking your wagers on whatever fight takes your fancy – and boxing is great in that there is no season as such, with huge bouts taking place year round. We’ve picked out three of the best online betting sites to review in detail, looking at odds, promotions, usability and range of markets and after that we’ll give you a quick run-down of the most popular boxing bets and markets, as well as the betting rules which could affect your bets.

Best Bookmakers For Betting On Boxing

Here they are, we’ve done the hard work of narrowing down the field to three so you don’t have to. Now we present the finalists for your consideration when putting a bet on boxing and any of these three fine betting sites would certainly be a great choice – or join all three to maximise your options and free bets. 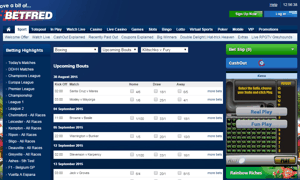 Betfred is another heavyweight in the boxing world. The “Bonus King” bookmaker has a history of partnerships with fight promoters and has been the title sponsor at events in the past. It comes as no surprise then that they take a good portion of the bets on the sport in the UK and they have some great promotions to ensure this continues.

They may not be the absolute best in terms of coverage, but they’re not far off and especially leading up to the big live televised fights when everyone’s getting in the mood, their coverage of undercards is very good.

In terms of range of markets they have a minimum of a Bout 3 Way (the name Betfred gives to its basic winner market, with the choice of backing either fighter or the draw) on every fight but for most fights they’ll also have round betting and method of victory as well, and occasionally even more, certainly for big fights. For the fights and markets they cover they’re consistently competitive with the other top bookmakers’ odds and are never far off the market leader if they don’t lead it themselves.

The money back guarantee is a popular promotion in boxing and Betfred are the king of this. They offer money back up to £200 on some fights (either as straight cash or, more usually, as a free bet), more than any other bookmaker, if your fighter goes down in the first round. Betfred also offers other forms of promotion around big fights and more special markets and price boosts so keep an eye out for those.

How To Bet On Boxing

Now we know who we’ll be betting with, we need to know how to bet. As mentioned earlier it’s very simple but it helps to have a guide to the basics. In this section we look at the most popular markets and give a brief explanation of how they work before running over a few rules which could affect your bet.

On big fights the bookies really push the boat out and offer a huge range of markets but here we take a look at the ones that you’ll find even on smaller bouts, quite simply because they are the most popular markets with boxing bettors.

That’s almost everything you need to know, but there are just a few rules to be aware of. Also remember that rules can vary slightly from bookmaker to bookmaker so check it out before you place your bet if you think any of these could affect your bet.