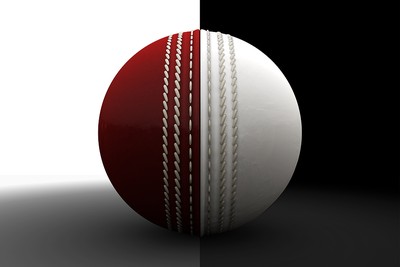 Balls play a significant role in many sports and whether they are hit, thrown, caught, or some combination of those three, they are the essential element to some of the most popular games on the planet. Balls in sport come in many sizes, styles and even shapes from the relatively large leather (or leather/plastic hybrid) spheres of football to the symmetrically dimpled golf balls, the elongated balls used in rugby and American football to balls with finger holes used in ten-pin bowling. There are even balls with wings! (But let’s leave quidditch and its Golden Snitch to one side.)

In most sports that use a ball (or balls), they tend to be quite standard in construction and often colour (though snooker could be seen as outlier on that colour front, albeit that the various different colours are standardised). In cricket, however, there are different types and colours of balls used in various circumstances or formats of the game.

In this article, we’ll give all the main details about the different balls used in cricket, including the types of balls, how they differ in terms of appearance and construction and when they are used. We will also explain the different properties of the various balls that make them better suited for certain situations than for others (though of course, the assessment of “better” will often differ markedly between the bowler and the batter).

The Laws Of Cricket: The Ball 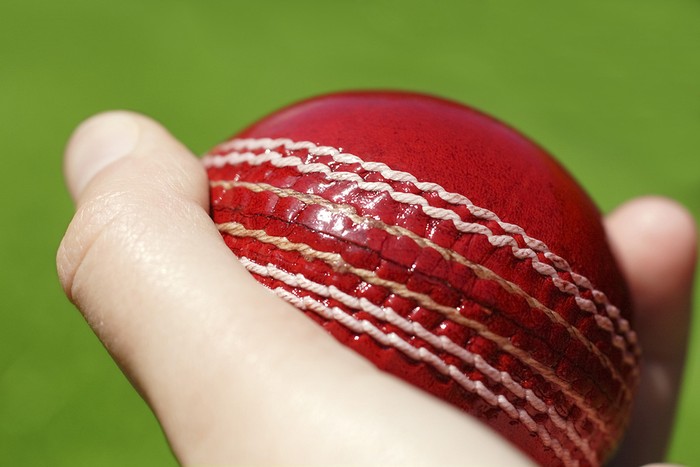 Before we go into the various types of ball used in professional cricket matches, let’s first take a brief look at what The Laws of Cricket say about the balls that should be used.

Speaking of new balls, the Laws specify that either captain can demand a new ball at the start of an innings, and that in matches that last more than one day, the captain of the fielding side can demand a new ball once 80 or more overs have been bowled with the current ball. If a ball becomes unfit for play, in the eyes of the umpires, it should be replaced with a ball that has similar wear to the ball (prior to the damage that made it unfit).

There is also the possibility that a ball could be lost, for instance if a player smashes it out of the ground and it cannot easily be retrieved. In such a scenario, the umpires will replace the ball with one that has a similar amount of wear, i.e. it had been previously used for a similar number of overs.

These are all rather general points, but let’s hone in a little and look at what balls are made of and the specific types of balls used in professional cricket.

What Are Cricket Balls Made Of?

Though cricket balls come in different colours and (quite subtly) different styles, they are all essentially the same in terms of their construction. That is to say, they all have a core constructed of cork which has string tightly wound around it before a leather casing or cover is stitched over the core to completely encase it. The stitches that attach the leather casing form a seam that protrudes and affects the bounce and flight of the ball.

In case you were curious about how cork, string and leather can be turned into the durable and nice-looking cricket balls we know and love, check out the following video from the world’s oldest producer of cricket balls.

As you will see from this film from 1956, things haven’t changed all that much over the years in terms of cricket ball production.

How Do Red, White And Pink Balls Differ?

Here we’ll take a look at what different colour balls are used and how they are better suited to different formats of the game, or indeed different circumstances of play. 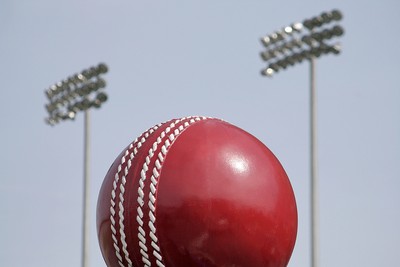 It stands to reason that if you are batting and awaiting a bowler to hurl a rather hard ball towards you at speeds approaching 100mph, you really want to see it coming (even if only to take evasive action!). As such, picking the ball that gives the batter at least a fighting chance of seeing the ball before it hits them in the ribs or other rather more delicate places, or worse still (!) takes out their middle stump, is only fair.

For the majority of the history of cricket, a red ball was used. This is partly because, for the majority of the history of cricket, matches were only ever played in daylight and in conditions in which a red-coloured ball could be easily seen. This changed with the advent of one-day matches that were played at night under floodlights. In such conditions, players found that the red ball would be difficult to pick out, which could potentially lead to dangerous playing conditions. The white ball was found to be easier to see in floodlit conditions and so swiftly became the colour of choice for limited-overs matches.

Although Test matches were traditionally played during daylight hours, in the 2000s some matches were played as day/night Tests. This caused something of a problem because if the red ball was used, it would be difficult to see once the daylight had passed, but (as we shall see) white balls were not durable enough to be used for the number of overs required for Test matches. As such, various coloured balls were tested until a pink ball was settled upon to provide sufficient visibility and durability to be used for day/night Test matches. 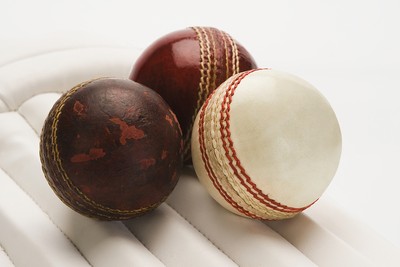 When it comes to limited overs cricket, durability does not tend to be an issue. But in Test matches, balls must be used for a minimum of 80 overs. For red balls this is not (usually) a problem, and indeed the way the balls move in the air and move off the seam changes as the ball degrades. Indeed, the fielding side tends to polish/shine one side of the ball to promote lateral movement or swing in an effort to flummox the batter into missing the ball or edging it to a fielder’s grateful hands.

The white ball is designed to be used in limited-overs matches, and thus is rarely used for more than 25 overs. This is because a new, different ball is used from each bowling end in each innings in (50 over) one-day matches, a rule that was introduced in 2011. In Twenty20 matches, a single new ball is used in each innings. As such, they were never meant to last anything like 80 overs and in order for them to offer something for bowlers, they tend to degrade a lot quicker than red balls (though never usually to the extent of a red ball that’s been battered around the ground for 79 overs!).

The pink ball, meanwhile, retains much of the durability of the red ball, but because it does not have the same wax or grease applied as red balls do (to ensure its appearance is not dulled), some players find it tends to wear down slightly quicker than the red ball. 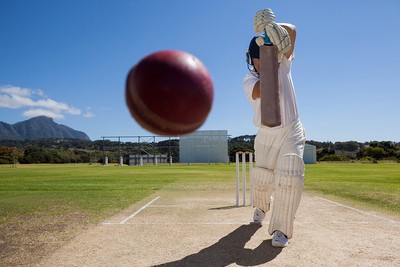 Whether you are bowling or batting, the way the ball moves through the air and how it bounces and moves off the seam is highly significant. In an ideal world, batters would prefer a ball that doesn’t swing much and which bounces in a predictable way. Whereas for bowlers, the opposite it true as anything that makes life more difficult for the batting side will be welcome by those trying to get them out.

White balls tend to be more highly polished than red balls to make them more visible at night. The upshot of this is that a new white ball tends to swing more than a new red ball or pink ball, though this is not an exact science and can vary according to conditions, and any difference tends to be short lived. In summary, whilst the white ball may swing a great deal for a short period, in general it behaves far more predictably.

The red ball offers initial swing for a longer period, as well as the possibility of reverse swing once it gets older, and also spins more. In short, it is the perfect ball for long-form cricket, offering enough for the bowler in different ways whist also being durable enough to be used for 80 overs.

Moving on, there is little real difference in the surface of pink and red balls, though the pink balls’ different finish makes them less easy to shine and thus older pink balls tend not to swing as much as older red balls that have been polished on one side.

Another difference between pink and red balls, in general, is that the seam of pink balls tends to be more pronounced which can affect both the ability of the bowler to grip (and potentially spin) the ball and also the bounce off the seam, which can be more variable under certain pitch conditions.

The production of cricket balls for the top levels of the games really is quite a craft, with just a handful of manufacturers permitted to supply match balls. There are essentially three companies that produce cricket balls for professional games:

There are some real and perceived differences between the different brands of cricket balls, notably that the Dukes balls and SG balls have more pronounced seams than Kookaburra balls (because the former are all hand-stitched whereas the latter are only partially hand-stitched. This can promote more lateral movement in the air in certain conditions and also tends to have slightly more movement off the seam and make it more likely to “kick up” compared to Kookaburra balls.

When Dukes made their white ball for the 1999 Cricket World Cup it was noted at the time that it seemed to swing far more than the Kookaburra white balls used in previous World Cups. As such they were never used again as the World Cup ball, being deemed far too bowler-friendly in a format where people want to see runs scored.

Why is the Type of Ball So Important? 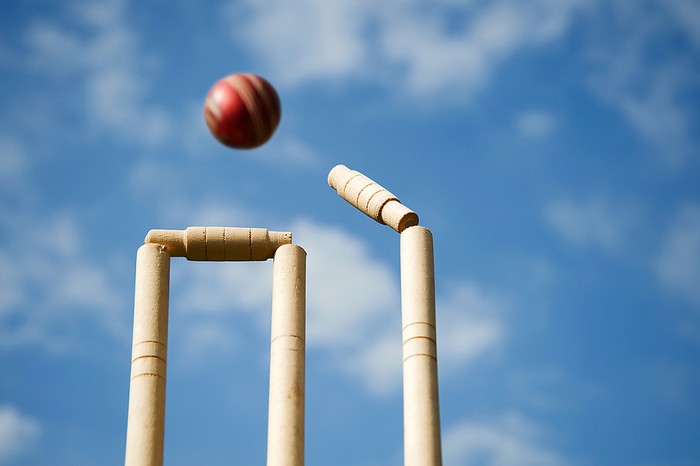 As we have seen, despite the basic construction of cricket balls used in the professional game being very similar, there are large differences in the way the balls move and bounce, age and indeed what they look like. Factors like how visible a ball is, its durability, how well it swings and how it moves off the seam can have significant implications for batters and bowlers and, ultimately, for how a given game plays out. And although some people can sometimes overplay the differences between, for instance, a red Kookaburra ball and a red Dukes ball, real differences certainly exist, as they do between white and red balls in general. Whether such differences are celebrated or feared might depend on if the person you ask is holding the ball in question or a bat!