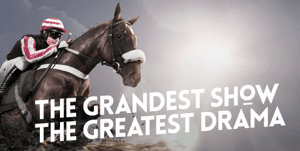 For one Saturday a year the sport of horse racing takes centre stage with the British public. The multitude of office sweepstakes being run up and down the country and conversations centring on “are there any greys running?” and “which one has a female jockey?” are all sure signs that it is Grand National time once again.

All this hype and attention is entirely justified for what is one of the longest-running and most exciting horse races in the world. The unique course and fences make this a test unlike any other for the brave horses and jockeys who set out, over nearly four and a half miles, in pursuit of Aintree glory. A great spectacle in its own right it is nevertheless a little more exciting when you have a bet on it…

In honour of this great event we’ve compiled a guide to betting on the Grand National – including how to pick a horse, which horses you should watch out for and even which bookmakers you should use to place your bet.

Best Online Bookmakers For Betting On The Grand National

If you’re one of those people who only bets once a year on this race, chances are you might not know who you should be placing that bet with in order to get the most from your bet. Picking a bookmaker with the best odds, betting rules or offers can not only result in bigger winnings should your horse romp home first, but can even be the difference between winning and losing your bet.

The Grand National is fairly unique in the horse racing world in that it attracts huge numbers of people who don’t normally bet. Because of the ‘one and done’ nature of many of the people looking to bet on the ‘National, a lot of the bookies withdraw their regular welcome bonuses for the day.

So, with that in mind, this next section covers betting sites that are offering some kind of free bet or bonus to new customers during the Grand National:

In addition to introductory free bets listed above, there are also a number of offers that will be running specifically for the Grand National – we’ll cover these in our next section.

Whilst many of the bookies pull their welcome bonus during the GN, there is no shortage of special betting promotions for the race itself – including money back offers, enhanced places and NRNB. And unlike the introductory offers listed above, anybody can claim these – no just new customers.

Before we get into the meat of the offers, we first want to mention three staples of the horse racing world. You may already be familiar with these, but just in case you’re not, here’s a quick explanation:

And here’s how our top bookies are stacking up:

How To Choose A Horse

A traditional method of picking the winner of this so called lottery of a race is to close your eyes and stick a pin in the paper. You very well might land on the winner in this way but then again you might stab yourself in the finger or at the very least damage the kitchen table! Far better to use a little logic when selecting your horse.

Should your luck be in it is far more satisfying if you have actually picked your horse by some method other than pure chance. So what should you look for? The success or otherwise of any horse depends largely on three factors, namely the ability of the horse, how good the trainer is and the quality of the jockey on board.

For the Grand National there are two main factors to look for in a potential winner. The first is the ability to jump a fence. The recent form figures of all runners are listed next their names in the paper. A simple method to remember here is that numbers are good, letters are bad. Any horse with F (Fell), U (Unseated) or P (Pulled Up) in its form figures should be avoided.

As this is such a marathon contest, the second factor to look for is the ability to run well for a long way. This is harder to spot at first glance but all the national newspapers provide a Grand National guide with comments on each of the runners. Look for any mention of a horse having won at three miles or further. Pay no heed to those who have done their winning at shorter than three miles as they are unlikely to have the necessary stamina. In terms of the age of the horse, nine or 10 years old is best and those carrying 11stones or less in weight have a better record historically.

The horse should always be the most important factor when making your selection but it does help if it is trained by one of the top men in the business. The best trainers have reached the top of the ladder largely through being better at their jobs than the others. They train the most winners over the duration of a season so it makes sense to have them on your side. Trainers to note are Paul Nicholls, Nicky Henderson, David Pipe, Jonjo O’Neill, Donald McCain and Philip Hobbs from England and Willie Mullins and Gordon Elliott from across the Irish Sea.

Third and finally you want to have the right man on board. Being a jockey requires a high level of skill and determination and as with most things in life some jockeys simply have these attributes in greater supply than others. The Grand National course tests the ability of a jockey more than any other, so again it makes sense to have one of the best in the business on your side. The top jockeys available for this year’s race are AP McCoy, Ruby Walsh, Sam Twiston-Davies, Tom Scudamore, Jason Maguire, Richard Johnson and Aiden Coleman.

Horses To Watch at this Year’s National

The following horses are out top picks, that you should consider choosing for your bets.

Shutthefrontdoor: The final Grand National mount of the retiring AP McCoy, this horse has already proved his ability in these marathon contests by winning the Irish National last year. The champion jockey clearly rates his chance as he has selected to ride him despite having other very good options. Trained by Jonjo O’Neill and owned by the millionaire JP McManus, the colours will be the famous green and gold hoops that have come home in front in so many big races.

Rocky Creek: This is the main chance of the reigning champion trainer Paul Nicholls. Having finished fifth in the race last year, Nicholls has had this year’s race as the main target ever since. He comes here better than ever having put up a career best last time out and will be ably assisted by Sam Twiston-Davies.

Ballycasey: Irish champion trainer Willie Mullins had a record breaking Cheltenham Festival in March and is represented here by this eight-year-old grey. The horse has been disappointing this season but has won at the highest level in the past. Ruby Walsh takes the ride and he could be dangerous at a big price if rediscovering his form, with arguably the best jockey in the business taking the reins.

Balthazar King: Richard Johnson looks set to take the ride on this horse who finished second to Pineau De Re last year. Trainer Philip Hobbs opted to miss the Cheltenham Festival in order to keep the horse fresh for this. He is an excellent jumper and looks a big threat.

Pineau De Re: Form for this doesn’t come much better than having already won the race. It is a tall order to win again but he did it really well last year and has been trained in much the same way this time around. Dr Richard Newland’s 12-year-old looks set to put up a bold defence of his crown under Daryl Jacob, despite his advancing years.