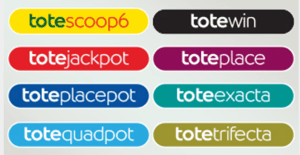 Totepool betting is a form of pari-mutuel betting offered by most betting sites but offered principally by Totes, who were owned by Betfred between 2011 and 2019. Totepool betting is offered on horse racing and greyhound racing and unlike fixed odds betting – “normal” betting at a standard bookmaker – where the return is fixed, with Totepool the payout is only known once the number of other winners are confirmed. Whilst there are a range of Totepool bets, including simple singles which are the most standard bets, what Tote are really known for is their huge jackpot bets, with lottery-sized prizes on offer from very small stakes.

Essentially pool betting takes all the stakes placed on a race or meeting, subtracts any taxes and fees, and the bookmakers’ profit, and then divides the remaining pool of money by the number of winners, with each getting an amount proportionate to their stake. Whilst this method of sports betting is not dominant in the UK, in other countries, including France, USA, Canada and Australia, it is either the only option or at least the most common form of betting. 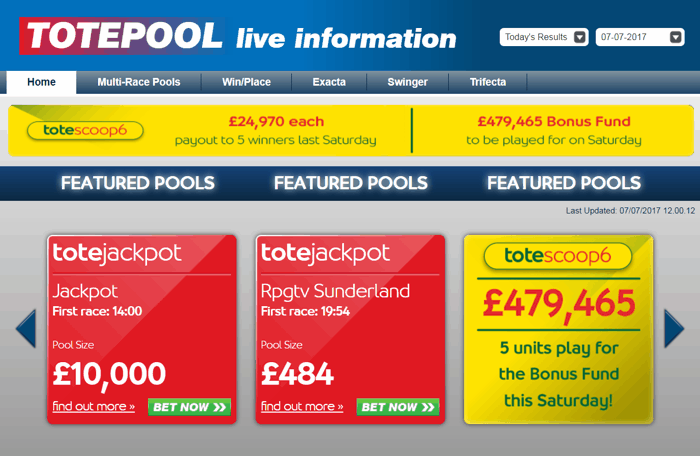 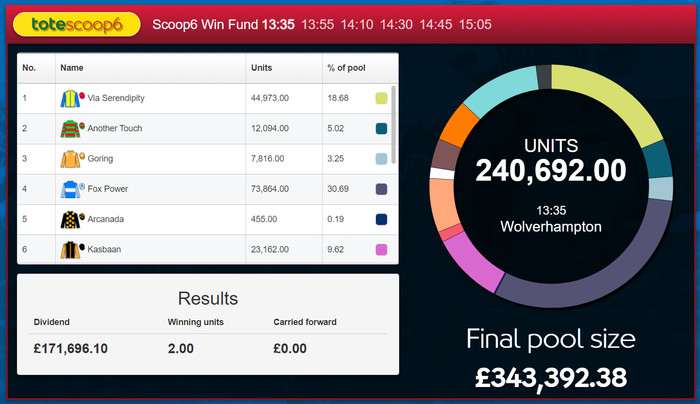 The totescoop6 is a type of Totepool bet that is offered every Saturday (and certain other one-offs) at Totesport and costs £2 to enter. Pick the winner in the six designated races to win, with a huge bonus on offer the following week. This bet has produced millionaires aplenty so why not try your luck? If nobody wins, the jackpot rolls over whilst there is also a consolation payment if all six of your horses place.

One of the biggest Scoop6 prize funds ever came back on the 24th May 2014 when it wasn’t won for 12 weeks, resulting in a win pool of over £10.7 million. In the end there were 8 winning lines, each getting more than £1.3 million.

As mentioned, the Scoop6 doesn’t just payout to those who pick the six winners, there’s also a return for anyone getting six placed horse in the selected races, just like a Placepot (see below). This is much less than amount paid for the winner but can still be significant. Again, as with any pool bet, the amount paid will vary depending on the number of winners. The dividend is declared to that paid by one £2 line.

In addition to the win and place funds, there is also a bonus fund which each Scoop6 bet pays into. This is only open to winners of the previous week’s Scoop6, who must pick the winner in the selected Scoop6 race. If they get it correct, they will claim the bonus fund which again will be shared between everyone that picks correctly. If this isn’t won, the fund rolls over.

The Tote Jackpot costs just £1 to play and again you need to pick the six winners from the six races at the selected meeting. This pool is offered daily and whilst the has a guaranteed minimum of £10,000. If this isn’t won, the pool carries over to the next, continuing to do so until it is won. Below is a chart which shows the pool sizes over a typical month, in this case April 2019. 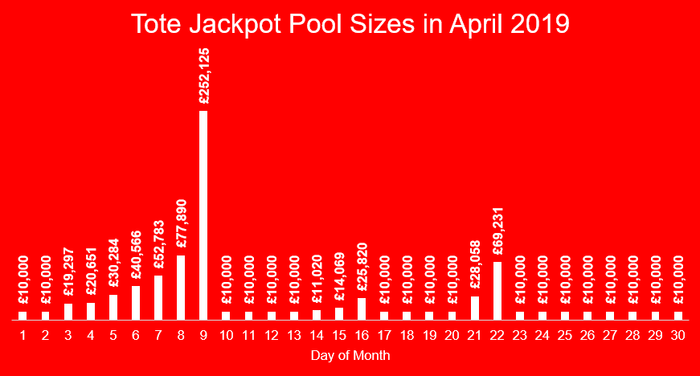 The Placepot is much easier to win but, correspondingly, offers a smaller prize. Offered through the week, this wager requires you to pick six horses that place (including wins of course) in the first six races at a given meeting. Unlike the Jackpot, which is on a selected daily meeting, the Placepot is available on all meetings in the UK and Ireland.

Depending on the number of runners, races might have one, two, three or four places. The table below shows the number of places in the Placepot races on Coral Welsh Grand National Day on the 27th December 2019 as an example.

Broadly speaking, the more short-priced placed horse, the more winners there will be and the lower the dividend will be. Conversely, the more long priced horse, the fewer winners there will be and the bigger the dividend. To give an illustration, the two Placepots below are both from Saturday 1st February 2020, one from Lingfield Park and one from Leopardstown. The figures shown are the average odds of the placed horses in each leg at the two meetings along with the final Placepot dividend for each.

The average dividend payout is more than £400 based on a £1 bet but there have been some huge £1m+ pools at Cheltenham and other big meetings. The chart below shows the size of the Placepot pools each day at the 2019 Cheltenham Festival.

The Tote Quadpot works in the same way as the Placepot though it is slightly easier, with players needing to pick horses to place/win in the last four races in the Placepot, usually races 3-6 inclusive, at a particular meeting. This is available to play on all UK and Irish meetings.

This bet has an average payout of 57/1 but, as ever, it can pay considerably more (although less too depending on how many people share the pool). Royal Ascot in 2018 has some particularly substantial Quadpot dividends, as shown in the chart below. 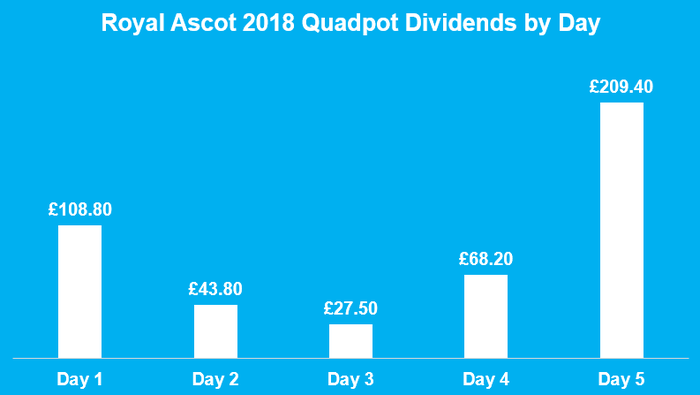 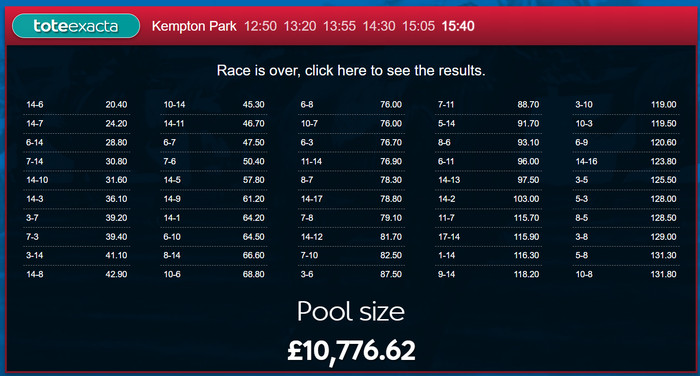 A Tote Exacta is similar to a Computer Straight Forecast (CSF) but the Tote claim to beat the forecast in 67% of races, paying 23% more, according to the data for the previous 12 months at the time of writing. Just pick the horses you think will finish first and second in any race, or for double the stake first and second in any order. This is a pool like another Tote bet so the amount paid will depend on how many people who bet on an Exacta in a particular race get the correct two horses.

Although the Exacta may have larger payouts overall, you may well find the CSF more favourable. A good example would the King George VI Chase Day at Kempton on Boxing Day 2019 (below). Here the Exacta paid more than the forecast in three of the six races, with the forecast larger in the other three. The payouts represent those given to a £1 stake.

The Tote Trifecta is a bet on the horses to finish first, second and third in a given race, it is the Tote version of a tricast. A Straight Trifecta, predicting the first three in order, can cost any amount that you wish to stake but with most Tote bets the dividend is given to a  £1 stake. The average Trifecta return is over £570, with a record dividend of more than £70,000. As with a tricast, the longer the odds of the three horses the larger the dividend. 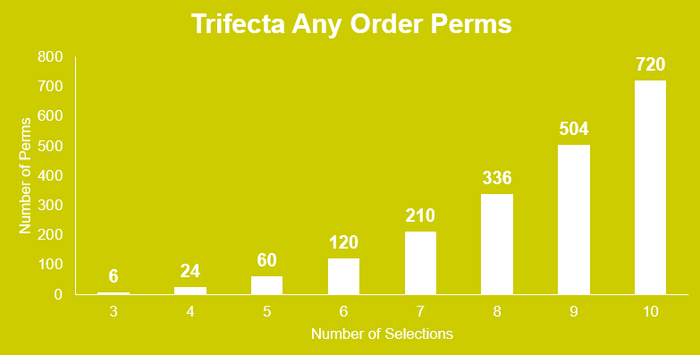 This is a feature of almost all Totepool bets, that you can add extra options to increase your chances of winning by covering more horses. For example on a Jackpot or Scoop6 bet you might have five bankers but decide to cover two or three options in one race. Alternatively you might choose to back two horses in each race, with this latter option totalling 64 different bets effectively (2 x 2 x 2 x 2 x 2 x 2 = 64), such that a £1 bet would cost £64, although the minimum unit stake is just 10p (£6.40 in total in this case).

These are the simplest forms of Totepool bets and are straightforward pari-mutuel wagers, equivalent to placing a win or each way single. Whilst the odds aren’t confirmed in advance you will be given an indication of the dividend based on a £1 stake, with the precise payout confirmed post-race.

The example below is from Newmarket on the 4th May 2020, the day of the 2000 Guineas, and compares what the Win and Place dividends were to the start price.

As you can see, sometimes the Tote dividend has paid more than a win or each way bet would’ve have paid and sometimes the opposite is true.

Scoop6soccer was a new addition to the Totepool stable in 2015 and, as the name indicates, it was a football bet. It was based on predicting six correct scores on six specific games and cost £2 to play, with huge £1m jackpots, the potential for huge rollovers and various consolation dividends for getting four or five correct scores.

Pros and Cons of Totepool Betting 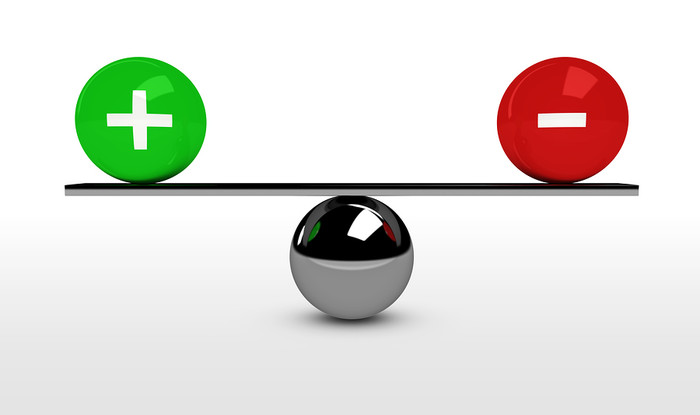 Totepool betting is quite a wide-ranging term that covers a number of different types of bet, each with their own pros and cons. In general this type of betting is not used by most people for straightforward bets, such as a wager on a horse to win or place in a given race. This is because people usually like to know in advance exactly what they will win if their bet comes in and whilst pool betting doesn’t provide that information, fixed odds betting sites do. Moreover, people tend to stick to what they know and fixed odds is simply the type of wagering that most people are familiar with.

The issue of odds is an interesting one and there is no real definite answer as to whether pool betting or fixed odds provides the best return. It can vary from race to race or meeting to meeting, of course, and also depends on the taxes, fees and bookie profit margins being used, although it is widely believed that the best fixed odds will usually be better than the pools return, through greater competition if nothing else. That said, as highlighted above, stats have shown that on certain bets, for example, Exactas (or forecasts), Totepool betting can offer greater returns.

The undisputable major advantage of pool betting, though, is the huge life-changing jackpots that can be won when the main Tote offerings, the Scoop6 and Jackpot, rollover. When the pools for these bets go well into seven figures the returns actually outweigh the probabilities of winning, meaning that mathematically speaking you can expect to make a profit in the long term (in theory). The theory is very different from practice but even so, the fact that you can win millions of pounds just for landing the winners in six races for a tiny stake is what makes these Totepool bets so popular.