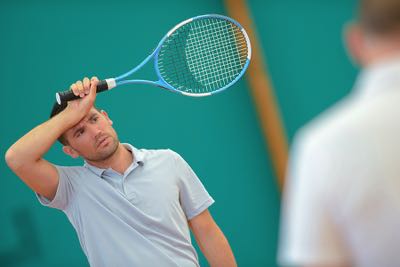 Perhaps because disqualifications do not happen often during tennis matches, when they do happen they can be quite dramatic… not least if you have placed a bet on the player in question (or indeed their opponent).

In this article, we’ll look at how often disqualifications (or “defaults”, as they are officially known in tennis) happen in professional tennis. We’ll explain what players have to do (or have done) to get themselves expelled from a game. We’ll then go on to explain what happens to your bet when a player gets disqualified, whether you’ve placed a bet on the player who’s been thrown out, their opponent, or indeed another bet that doesn’t rely on either of the players winning (such as how many games will be completed in a given match).

Note that most of the information here applies to doubles matches as well as singles, but for ease of language we’ll refer to each player as if we’re only talking about singles matches.

Reasons Players Get Disqualified in Tennis 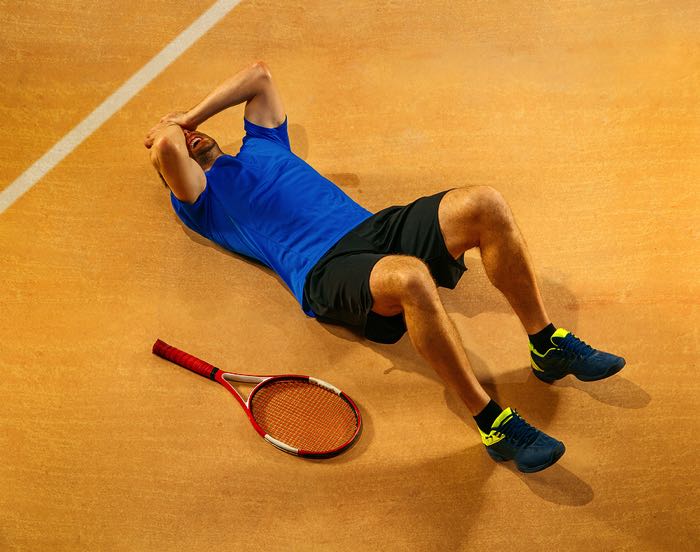 The International Tennis Federation (ITF) is the world governing body of tennis and covers all aspects of the game including men’s tennis, women’s, juniors, seniors, wheelchair tennis and even beach tennis. They are responsible for overseeing many aspects of the game, including the rules. According to the 2021 ITF Procedures For Officials,

The ITF Supervisor/Referee may declare a default for any misconduct violation of the Code.

The “Code” refers to the Code of Conduct that outlines how players (and others) should behave before, during and after any given tennis match “in order to maintain fair and reasonable standards of conduct”. Though breaches of the Code can result in an immediate default (disqualification) of a player, this is only for the most blatant, dangerous or disrespectful offences.

Minor breaches, such as uttering an audible obscenity or racquet abuse, usually result in a warning, then a point deduction, then the loss of the whole match (hence the player is disqualified. Code violations can occur for any number of reasons that fit into a range of categories including the following:

The general conduct of players should be professional both during the match and also in and around the tournament site (including hotels, transport and functions).

Players must be ready to start when their matches are set to commence.

A player’s clothing, shoes and racquets must adhere to any regulations and players must present themselves in a professional manner. Specific types of shoes are required for certain surfaces.

Names of equipment/clothing manufacturers or sponsors can be shown on clothing and racquets under certain conditions and limitations (for instance not exceeding a certain, defined area).

This covers various aspects of abuse including verbally abusing other players, umpires or indeed anyone else in the vicinity of the match or tournament site. Other sections include physical abuse, ball abuse (dangerously or violently hitting a ball, except during a point) or abuse of racquets or equipment.

Players are not permitted to receive coaching during a match and if they do (for instance, signals from their coach from the stand) they are in violation of the Code.

Any conduct that is “clearly abusive” or could be deemed as detrimental to the match or tournament could be viewed as unsportsmanlike conduct and result in a penalty. 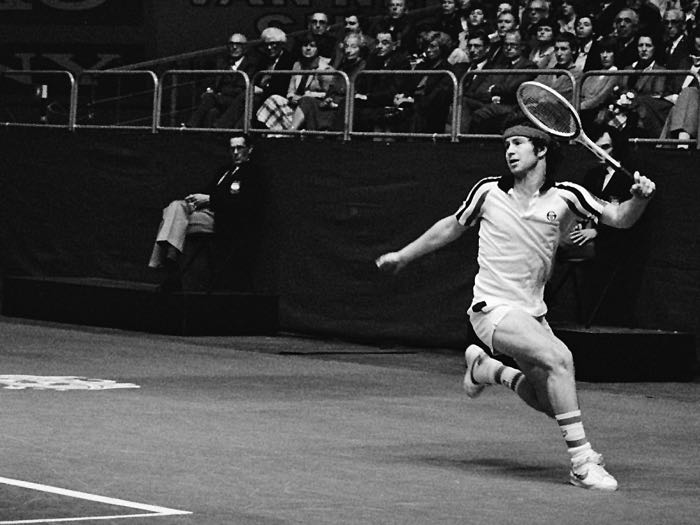 Now we’ve seen some of the Code violations for which players can receive penalties, let’s take a look at the offences that have caused defaults in real matches in the past. Interestingly, at the time of writing (August 2021), 20 men have been disqualified from ATP tournaments and Grand Slams since 1976, while only two women have.

You could make that 22 men in reality as Tim Henman and Jeremy Bates were also disqualified from a doubles match in Wimbledon in 1995 after the usually mild-mannered Henman struck a ball girl with a ball. Here are some other examples of players being disqualified from the main draw of tournaments in the Open era of tennis:

The Romanian French Open and US Open winner was the first player to be disqualified in the Open era when playing against Roscoe Tanner at the American Airlines Tennis Games. As well as bowing and showing his backside to the tournament referee and then calling him a “four-letter word”, Năstase also left the court and, in an apparent act of rebellion, sat in a box and put his feet up. The referee felt he had no choice but to default the player … and we have to agree it was a fair call!

Given his reputation as the bad boy of tennis, it is perhaps surprising that John McEnroe was only disqualified once in his professional career. That happened towards the end of his time as a singles player at the Australian Open in 1990 against Swedish player Mikael Pernfors.

McEnroe managed to tick off three violations of the Code on the way to his default. The first was for unsportsmanlike behaviour for intimidating a line judge; the second was for racquet abuse, and finally – as one might expect for the American – for verbally abusing the umpire. It was a case of game, set and match of Code violations for McEnroe.

Austrian Stefan Koubek is – at the time of writing – the only player in the Open era to have been disqualified twice, once at the French Open in 2000 (for hitting a ball boy with the ball) and then in 2007 in the Open de Moselle for abusive language directed at a tournament supervisor.

Arguably the greatest player of all time, Novak Djokovic would probably have added to his massive haul of Grand Slam titles had he not been disqualified from his fourth-round match in the 2020 US Open. After losing his serve against Spanish player, Pablo Carreno, Djokovic hit a ball in frustration… unfortunately, the ball hit a line judge in the throat and the officials had little choice but to default the Serb.

Just to show it’s not just the men who behave badly we thought we’d mention Russian player Anastasia Rodionova who was disqualified from the Cincinnati Masters after hitting the ball at spectators who had the temerity to cheer for her opponent, Angelique Kerber.

What Happens to Your Bet If Your Player Gets Disqualified? 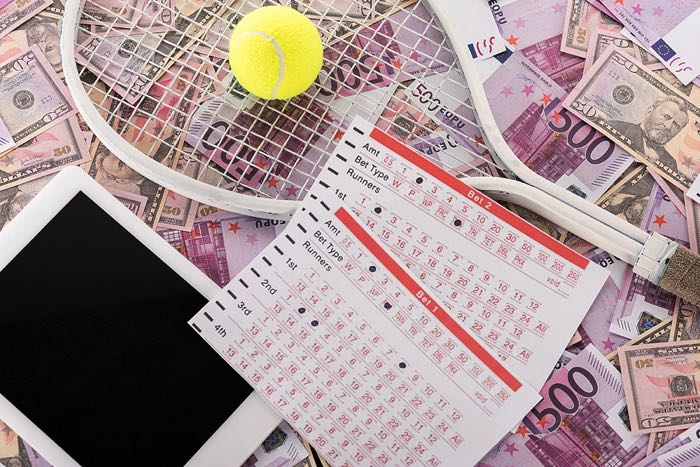 As with player retirement (for instance, after picking up an injury during a match), if a player you have bet on gets disqualified it is possible your bet will simply be lost. This stands to reason in many ways because if you have placed a bet on Novak Djokovic to win a given tennis match against Andy Murray and Djokovic gets disqualified, then Andy Murray will be declared the winner of the match. Hence it would seem common sense that your bet on Djokovic would be declared to have lost and as such you’ll have lost your stake.

But it is not always as cut and dried as that and, where most bookies are concerned, the timing of any disqualification (or retirement) is all-important. This sometimes depends on the specific rules of a particular betting market. For instance, a bet on a player in the match betting (the player to win the match) market will generally be settled as a loser if the player you backed is disqualified at any point of the clash.

But if, for instance, you are betting on something like the total number of sets to be played in a game, often a disqualification of either player will result in the bet being voided rather than won/lost (unless your bet has already settled, for instance if the game has gone to the fifth set and you had backed more than three sets).

Because the rules can vary between bookmakers and indeed between markets, it’s important that you check with your chosen online bookie for the specifics of what happens if your player gets disqualified. The terms and conditions can be found on the betting site in question. Sometimes the specific rules can be tricky to track down but if you contact the customer services department of your chosen bookie they will be able to give you the necessary information or a link to the relevant page on their site.

In general though, if the player you have back is disqualified the best you can hope for is voided bet, but chances are your bet will have lost. For bets that don’t rely on one or other player winning or achieving a specific goal, your bet will probably be voided if either player is disqualified, unless the bet has already unconditionally settled.