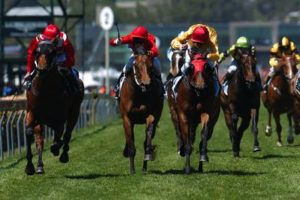 Horse racing is a game of opinions. Fans, punters and bookmakers all look at a race and come to their own conclusions about the likely outcome. But it is definitely true to say that there is (usually) some key information underpinning those opinions. Among this information, the most basic and most important is which horses are running in a given race. 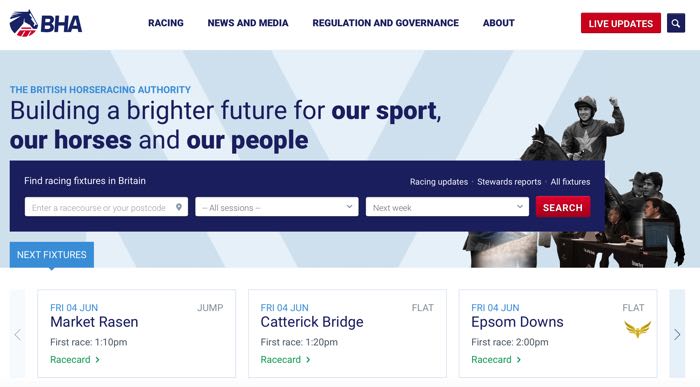 As the name suggests, final declarations are the last stage of the administrative process that goes into a horse running in any given race. This process varies wildly across the sport but there are some general stages that are well worth all racing fans understanding.

If an owner wants their horse to run in a specific race, the first step is to enter them into it. For races in Britain, this means either phoning up the British Horseracing Authority or going on to their website and filling out the registration form.

Entries open and close at different times for different races. This ranges from overnight races in which the entries close at the same time as the final declarations to big prestigious races like the Grand National or the Classics for which entries must be made months in advance. The Derby is a good example as horses can be entered before they run in a race or are even named.

For the majority of races taking place in Britain, horses must be entered five or six days before race day. In big races there are often multiple chances for horses to be entered including relatively late on where places are available for a big fee (£85,000 in the case of the Derby). This is called a supplementary entry.

The biggest races of the year on both the flat and over jumps receive many more entries than there are places available. Therefore, there are various steps along the way to the race in which the field will be reduced. If we take the example of the Derby again, it costs £560 for an owner to enter their horse into the Derby as a yearling. Around 400 owners do this every year. In March of the year of the race, owners must pay a further £1,100 for their horse to remain in the race and just shy of 300 horses drop out at this stage.

There are similar stages in other races in which owners will voluntarily decide that they don’t wish their horses to run. However, not all of these stages are voluntary. Many more owners want their horses to run in the Grand National than the 40 who make it to the start line at Aintree. In the case of that race and other handicaps, the process for deciding who gets a run is fairly simple – those with the highest official rating get in. This is called the balloting out process. In non-handicap races the decision to ballot horses out of a race is random.

Although there are some other stages in the lead up to a race such as the naming of jockeys booked to ride on certain horses, the next most important stage is the final declarations themselves. In theory, if a horse remains in a race after final declarations then it is all systems go and the horse will run in that race.

On a busy day of racing, such as a Saturday in which there are a couple of high quality meetings taking place, it is common to see horses entered into multiple races. Owners and trainers like to have options so that they can be as sure as possible about the other horses set to run in the race and, most importantly, the weather and ground conditions. As such, there is always keen interest when the final declarations are announced and a lot of movement in the betting markets tends to follow. 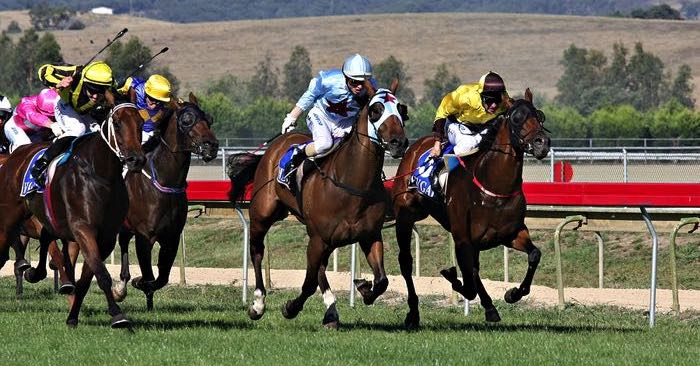 Ante post betting is extremely popular among savvy punters on the lookout for a juicy price. The potential extra rewards come with extra risk though as the earlier you back a horse to win a particular race the higher the chance there is of that horse being withdrawn and the bet being settled a loser.

Ante post betting markets include many more horses than can run in the races themselves. While the withdrawal of horses from races can have a big impact on the market, it has nothing like as much impact as after the final declaration stage which, as mentioned above, is supposed to mark confirmation that a horse will run in a race. Therefore, bets on horses who are withdrawn after final declarations are made void with stakes refunded rather than settled as losers. 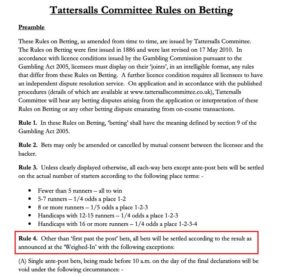 The final declarations mark the end of ante post betting and the start of a new market which will run all the way through to the start of the race. These new markets have new rules, the most important of which is Rule 4(c) of the Tattersalls Committee Rules on Betting.

Known simply as Rule 4, this is a protection for the bookmakers. The risk and reward of ante post betting works for both punters and bookies, however, when a horse is withdrawn from a race after final declarations it often leaves bettors sitting on prices which no longer accurately reflect their horse’s chances of winning. Rule 4 mandates that a percentage of the winnings from bets on races where horses are withdrawn late is deducted.

Clearly, the withdrawal of an odds-on favourite is going to have a much more significant impact on a market than the withdrawal of a long shot. Rule 4 is set up with this in mind with a sliding scale of deductions based on the price of the withdrawn horse. The table below sets out this scale (the maximum deduction will never exceed 90p in the pound even in the case of multiple withdrawals).

The other implication of Rule 4 surrounds each way bets. The reformed market may offer fewer places than the original market but the number of places at the time of the bet being struck will stand. 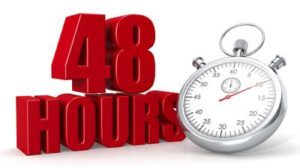 Horse racing had to make a number of adjustments during 2020 – as most sports did. Like many industries, some of those changes were already being talked about and will remain in place well into the future. The move to 48 hour final declarations across the board is one such change.

48 declarations are nothing new. Owners have had to submit their final intention to run their horse at least 48 hours prior to a number of jumps races and most flat races for years. However, final declarations for lower profile, midweek National Hunt races did not have to be made until 24 hours before.

Health and safety considerations were given as the original reason for the change to blanket 48 hour declarations. Racecourses, ground staff and the various people involved in the management of a horse (trainers, jockeys and owners) required the extra time to plan and prepare for race day and it was decided that 24 hours would not cut the mustard.

The move to 48 hour declarations has not come out of thin air nor has it come solely due to implications of the global health crisis. Racing fans, punters and bookmakers have long favoured the extra certainty that comes with earlier declarations. These groups, as well as journalists and broadcasters who cover the sport, were largely vocal in their praise of the move.

Trainers are the main group opposed to the new blanket 48 hour declarations rule. While no trainer has a problem making plans two days before a race in the spring or summer when they are sure what sort of ground their horses will have to race on, it is a different story in the depths of winter when the ground can deteriorate rapidly.

It is very frustrating for all racing fans when a horse is scratched from a race after the final declarations have been made. However, trainers have the best intentions of their horses front and centre of their mind so such late withdrawals are only going to increase, especially at during the winter months when there is already much uncertainty.