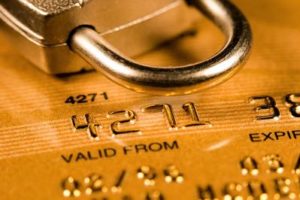 There are many ways to add money to your online betting account and it is now quicker and easier than ever to fund your account and get punting. Whether you want to place a bet on a game of football or a horse race, play a few hands of blackjack or poker, or indulge in some online bingo, it is all just a few clicks away. However, as of the 14th April, 2020, punters fewer options when it comes to making a deposit as customers can no longer use credit cards to bet online.

The UK Gambling Commission (UKGC) decided to introduce the ban following a consultation that took place in 2019. It was estimated that almost one million customers had previously been using credit cards to gamble. A gambling participation study undertaken by the Commission that same year revealed that 22% of those using credit cards were problem gamblers and an even higher proportion were considered to be at risk. 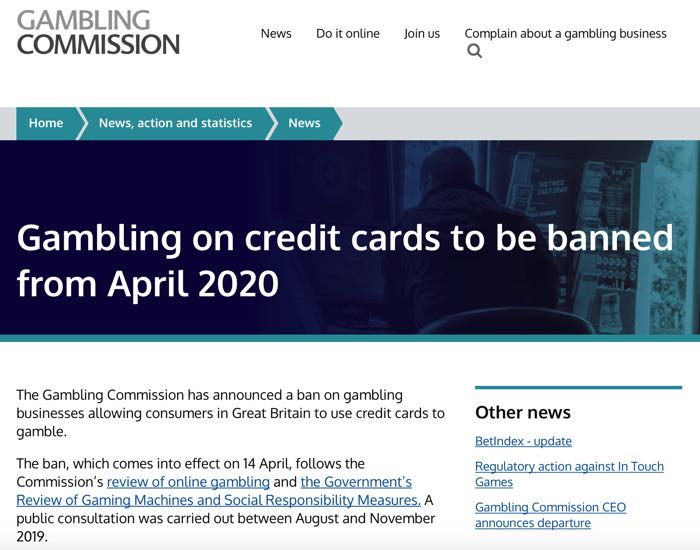 The UKGC and the government have taken many measures over the years to try to keep gambling as safe, fun and fair as possible. Frankly, many of these have been almost laughable, such as the argument that third party promotional sites should not use pastel colours anywhere on their websites as these “appeal to children”. However, the ban on credit card betting was a very simple, logical and highly effective measure the regulator could take in order to limit the negative impact gambling can sometimes have.

The Gambling Commission said that the ban would “add another vital layer of protection for consumers”. In addition, chief executive, Neil McArthur, stated that the ban “ultimately reduces the risks of harm to consumers from gambling with money they do not have.” He added that the timing of the introduction was especially beneficial as the pandemic had led to concerns about an increase in problem gambling.

Gambling on Credit Card Has Always Been a Bad Idea 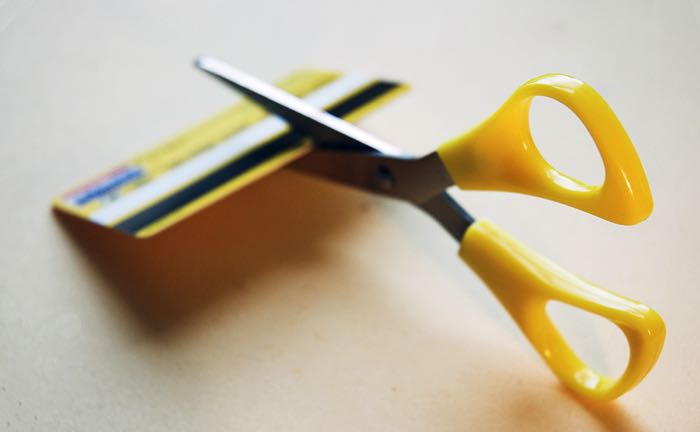 Whilst the ban on credit card gambling is new, making bets with money you do not have has always been a truly terrible idea. It does not just break but actually smashes into smithereens one of the most fundamental rules of betting: only bet with money you can afford to lose. Losing all of your own money is bad enough if it leaves you unable to look after your children, pay your rent, buy food, or even just enjoy your usual luxuries such as holidays, meals out and trips to the pub. But taking that even further and not only losing all your funds but losing extra on top of that is simply madness.

Of course, nobody sets out to do that and when they make bets with a credit card, punters typically believe they are going to win and in so doing will be able to recover from a bad situation. This takes us to another of the most crucial rules of gambling: never chase losses. Betting to win back money you have already lost is a bad idea because it ignores the fact that invariably the bookies (or casino or whatever) have the edge. This means that no matter how much you dream of winning your money back, paying your rent and having some left over for a few beers, the probability is that your losses will increase.

By removing the possibility of gambling with money a punter doesn’t have, the Commission have essentially removed that temptation. Of course, not all decisions to gamble using credit are made when going full tilt or chasing losses. Some people are actually so convinced they are on to a good thing that they use credit to enable themselves to win (in theory) more than they would be able to if they only used their own money.

Whilst some successful hedge fund investors may use leverage and variations on it to increase their returns, for punters it is not advised. There are countless investments over the years where people have invested at or near the top of a bubble they believed wouldn’t burst, only to see things come crashing down. In terms of betting, many believed that Football Index was “easy money” and borrowed heavily to “invest” (we should say bet) more before that gravy train crashed hard and fast.

No matter whether the motivation for betting on credit is desperation and hot-headed loss-chasing, or what you believe to be a calculated decision, if things go badly – and there is always a chance they will – the end result is the same. Not only have you lost all the money you have but you now have debts to repay as well.

Borrowing Is Too Easy

To make a bad situation even worse, borrowing in modern times is very easy and indeed it is, in essence, this issue that caused the global financial crisis of 2008. Aside from a relatively small number of high rollers and perhaps the odd person who inherits money or is mid-transaction in selling a house, most punters do not have access to thousands of pounds and certainly not to tens of thousands.

However, through credit cards, even low earners have access to thousands of pounds, with credit card companies happy to increases credit limits even if just the minimum payment is being made. Someone with a gambling problem only using their own money may lose a few hundred pounds, or even a few hundred a month. However, that same person armed with a credit card can easily lose thousands in a very short space of time, money they would not normally have access to. What’s more, it is all too easy to obtain new credit cards once limits are reached.

Can You Use Credit Cards Through E-Wallets? 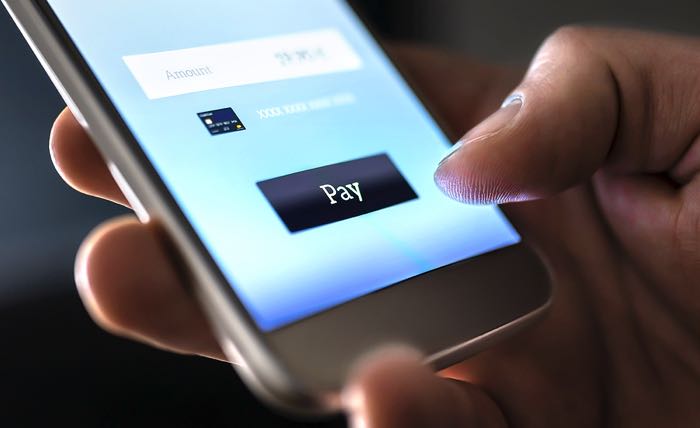 When any legislation is brought in, many will try to find ways around it or loopholes that can be exploited. It would not take a great mind to try to circumvent the ban on credit card betting by using an e-wallet, such as Skrill or PayPal. However, given how obvious such a ploy is, it should be no surprise that the UKGC have ensured that this is not possible.

Payments can now only be accepted from e-wallets that ensure that credit cards are not used for gambling firms. Technologically, this is relatively simple and so as far as we know there is no way for gamblers to use pre-fund e-wallets via credit cards and then use their balance to add cash to any form of betting site.

What About Pre-Paid Cards?

There are a huge range of pre-paid cards that can be used to add money into your favourite betting site. Many financial institutions offer them through Visa and Mastercard, whilst there are also more specialist companies such as Ukash and EntroPay. Pre-paid cards are reloadable money cards that function largely like a credit or debit card except that you can only spend whatever you have added to the card. They are not direct sources of finance, but rather a means of using cash taken from elsewhere.

In one sense, they can be viewed as similar to pay-as-you-go mobile phones in that once the balance has run out, they cannot be used until you top them up. In theory, these cards could be topped up using a credit card, in some cases directly or by using a credit card to obtain a cash advance and then using that cash to fund the pre-paid card. This latter approach could also be used to fund a debit card of course (by paying a credit card cash advance into your bank account) but we strongly advise against it.

Cash advances typically incur very high charges and interest straight away from credit card companies. This means they are financially highly inefficient (costly), as well as being a bad idea for all the reasons stated above. Ultimately, the UKGC has had to accept that they cannot prevent the use of credit cards for gambling by wholly indirect means.

However, they rightly assert that “it is important to note that such methods involve much greater levels of friction in the gambling transaction journey than simply using a credit card through either the gambling operator’s website or through an e-wallet that the operator makes available through their payment gateway”. In short, what they mean is that whilst they cannot 100% prevent people from betting with borrowed money, simply by making it so much harder and necessitating premeditation, they believe they can dramatically reduce the number of people betting on credit.

Loans and overdrafts fall very much into the same category. If a punter decides to take out a loan, or has an overdraft facility with their bank, there is really no way for a betting site to be able to stop them from using this to fund their account. Unless masses of financial data was widely shared, the bookie or casino would simply see an incoming deposit as being via a debit card, not knowing that prior to that the money had been borrowed.

Once again, there is an extra layer of financial administration necessary here and because most problem gambling and chasing of losses is done impulsively, in the heat of the moment, it is hoped that the current measures will still be largely effective. One extra step that is occasionally used and is being considered for a wider and more official rollout is requesting affordability information and even the instigation of source of wealth (sometimes statement of wealth, or SOW) checks.

This would mean that betting sites could, or might even be required to, query where your betting funds were coming from. SOW checks could in theory prevent all gambling via credit, be it credit cards, loans, overdrafts or anything else but they are highly controversial and contentious for a range of reasons.

Ultimately we do not believe such measures will be introduced any time soon. The ban on credit cards was an excellent move and whilst it was probably overdue, there is no doubt it will help reduce the number of problem gamblers or at the very least limit the damage they can cause to themselves.