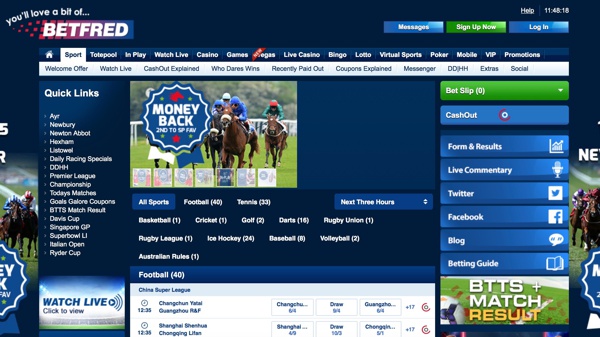 In 2017 the Betfred brand will be celebrating their 50th anniversary. It’s an amazing feat from one of the biggest bookmakers in the world, but what’s probably most impressive is the fact that they are still based in the UK.

The company have worked hard on making sure that British sport remain their number one priority, and whilst they still offer sports from around the world as well as accepting a global player database, it’s the UK market that they are really tuned towards.

The company is licensed by the British Gambling Commission, ensuring player safety as their number one priority.

Whilst sport lies deep in the roots of Betfred, the modern trend for these types of gambling sites is to attract players across a number of genres within the industry. Casino, Poker, Bingo and Lotto are all well catered for, of which we will look at further throughout this review.

As mentioned, it’s sports betting that is the main area of focus with Betfred. Their sportsbook is one that has grown exponentially over the last decade or so taking them from a bit-part player, to one of the biggest bookmakers in the world.

Mobile betting has been another area where Betfred have been keen to initially implement and in more recent times, improve. The app can be accessed on both iOS and Android devices, along with a number of additional tablets as well.

In terms of pricing for their odds, Betfred tend to be pretty solid on the whole. We found that the majority of their odds were about industry standard, but few were right at the top of the pile. That being said, whilst the gap between them and someone like BetVictor will be apparent, using Betfred on a regular basis will likely see very little difference between the remaining pack.

Outside of these sports the market coverage is OK, but it’s certainly not going to be troubling any of the bigger players. The number of sports are there (over 20 to choose from) but once you dive into each sport, you’ll notice that they are pretty thin on the ground.

Live betting is about as in-depth as Betfred are able to make it, given the sports and markets that are on offer. Most of the games that they provide odds for will turn live and the link with their new ‘In-Play’ section is one that was pleasant to use.

Live streaming is a fairly new addition to the Betfred armoury and they provide coverage of sports that include football, tennis, basketball, greyhound racing and horse racing. You will need a funded account to watch the majority of the live streams, but the horse racing section will require you to have placed a bet of £1 or more on the specific race to be able to watch it.

Betfred were a bit slow on the uptake of cash out betting, but we were delighted to hear the announcement that they would be including it. Cash out betting allows you to essentially cash out your bet before the match has finished to guarantee your returns. Anything that happens after the cash out is irrelevant and the returns you take at the time will be your final amount.

The casino section for Betfred certainly isn’t as widely recognised as their sportsbook, but it’s one that shouldn’t be underestimated and is a compelling addition to the bookmaker’s catalogue.

Betfred have teamed up with software provider PlayTech, who just so happen to be one of the biggest and most successful in the industry. The games range in terms of platform with slots, table games, video poker, scratch cards and jackpots all on offer. 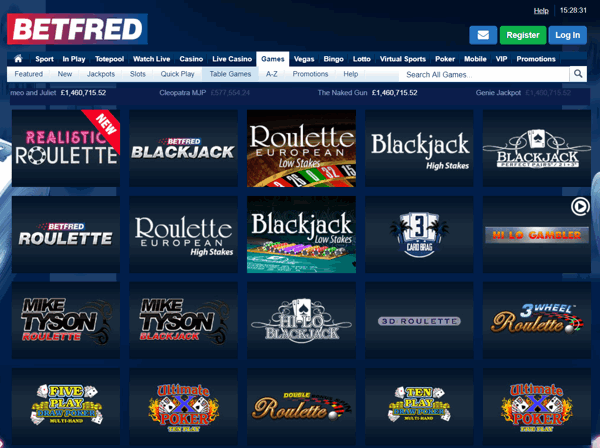 As mentioned, the Betfred casino is powered by PlayTech and it can be used via your browser, mobile or even downloaded to your computer. Their slots section is one to be admired, with their catalogue including over 150 titles ranging from branded to stand alone games.

The affiliation with PlayTech means that there are some huge jackpot games on offer – some of which hit the 7-figure progressive jackpot mark on a regular basis. Just to give you an idea of scale, some of the bigger jackpots grow at such a pace that £1 is added roughly every 5 seconds, 24/7!

What’s great about the Betfred mobile casino is that it’s standalone from their sportsbook. This means that you are in a dedicated area and can easily access and enjoy your favourite games direct from the casino app. Similarly to their sportsbook app, you can access them from either Android, iOS or a tablet. 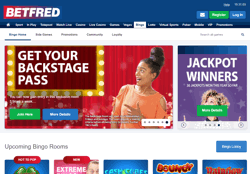 As mention at the start of this review, Betfred offer up a fairly new bingo section for their punters which runs on the Virtue Fusion bingo network. Games run around the clock and bingo giveaways, prizes, enhanced cards and themed nights are all on offer.

For full details of the latest offers, see the promotions section of the betfred website. 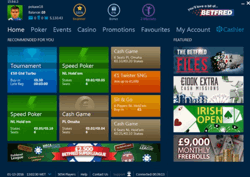 The Betfred poker room is situated on the iPoker network, meaning you can join hundreds of thousand like-minded players, again around the clock. Betfred run a series of freerolls for their new players with jackpots ranging from £50 up to £1,000.

As you’d expect from one of the leading sportsbooks, there are a number of secure and convenient ways to bank with Betfred. These include Visa, MasterCard, debit card, Neteller, PayPal, Moneybookers, UKash, Cheque, Bank transfer and also via any Betfred betting shop.

Withdrawal limits range depending on your chosen method of banking, but can expect anything between £4,000 and unlimited. Bank transfers will cover anything over £10,000 but for this you will be charged a fee of £7.50, which is the only method to incur a fee.

You can contact Betfred via email, post or phone, with the details of each being listed below: