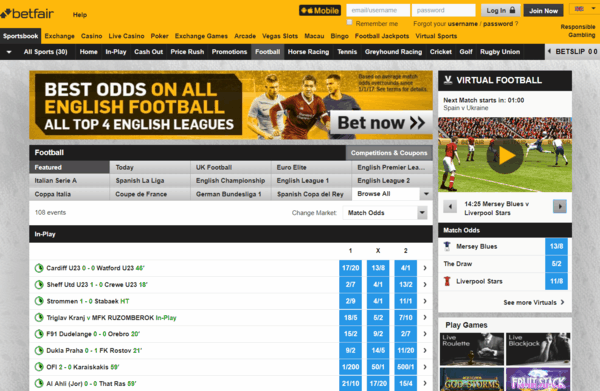 Betfair are the biggest betting exchange in the world. When they first came to market in 2000 they revolutionised the way in which the average punter could gamble. Instead of simply being able to back a selection, they allowed their customers to lay a bet, just as a bookmaker would. The ability to lay a bet is now something that the majority of professional gamblers integrate into their betting regime and as a result, Betfair almost single handily changed the way we bet.

What’s been admiral about Betfair is that they started as a UK company and still reside in London, England. The UK Gambling Commission licenses the company and they have been a stickler for promoting UK business and attempting to create as many jobs as possible over the years.

The company are best known for their sports betting section – now boasting a more ‘traditional’ style bookmaker alongside the exchange – but also run very successful casino, poker and bingo rooms, alongside a number of game variations.

As mentioned above, sports betting is by far the company’s most popular outlet. They have a player database well into the millions and it’s here where the company apply their main focus. What’s been impressive to see with Betfair over the years is how they have adapted their sports betting. They were the first bookmaker to really offer both traditional bookmaking and also a betting exchange, which in turn has made them one of the most well rounded sportsbooks in the industry.

An interesting fact about the betting exchange at Betfair that many people wont realise is that a lot of their rival bookmakers actually use this section if they feel they have too much of a liability on a certain bet. It’s a way in which they can either minimise their loses or simply balance their own book if they feel a certain bet has too much riding on it. So, whilst the sportsbook is an important section for many everyday punters, it’s also vital for a lot of bookmakers and in turn, the betting industry as a whole.

Betfair are on the whole one of the best in the business when it comes to their odds pricing. In fact, for a long time they were head and shoulders above anyone else, but as the market has become more competitive, other bookmakers have started to close that gap. If we were pushed, we would say that on the whole Betfair were well within the top 5 of all bookmakers when it comes to their pricing throughout the sports book.

What’s great about the site is that if you feel that on the sports book you aren’t getting the price that you feel the bet warrants, then you can head over to the betting exchange to see if you can get a better price. This will actually occur more often than not, so even if you are happy with the odds you have received, pop over to the exchange just incase you can find yourself a better price.

Market coverage is superb, as you would expect from such a high profile bookmaker. The sports that they cover are stunning and what we really liked is that the number of markets for upcoming sports such as MMA and UFC are rapidly growing as well. They cover the US based sports along with your more traditional UK based sports such as football, cricket, tennis and of course, horse racing. The only real miss that we could find and in turn negative, was that they don’t include Asian Handicap markets for football betting, which is surprising given how popular those types of bets are.

Live betting has been part of Belfair’s DNA and they were one of the first companies out there to really grasp and pursue the concept. The range of games that you can bet on, as you can imagine, are amazing and the ability to have so many markets to choose from once a game starts is a really nice feature to have.

They’ve also recently re-designed the in-play section and now the level of detail is really amazing. We loved the match center style where you could see live up to the second updates of what’s happening on the pitch and also a good overview of the stats for each specific game.

The streaming section is also a thing of beauty and an area that many people will underestimate with Betfair. The channel now covers dozens of sports including football, cricket, horse racing, tennis, American Football, darts, golf and loads more. The streaming section is free to view as long as you have a funded betting account. You’ll also be able to gain access to At The Races, which is a UK based racing channel showing every live race across the UK and Ireland as part of the deal.

The cash out feature has been a fairly recent introduction for the bookmaker and this allows punters to essentially cash their bet in before the bet has fully been settled. It’s a pretty common feature for a lot of bookmakers these days, but it’s one that Betfair performing well, especially as they allow a partial cash out meaning that you can still leave some of your bet to ride.

Like all major brands who’ve seen success in certain areas of online gambling, the natural progression for them is to shift their focus onto newer pastures. Betfair have been no different in this and after their betting exchange became more than established, they decided to branch out and include a casino section.

The Betfair casino is one that’s been flourishing over the last couple of years. There’s no doubt that sports betting is their bread and butter – and likely always will be – but the growth of the casino has been impressive to see, as we will highlight next. 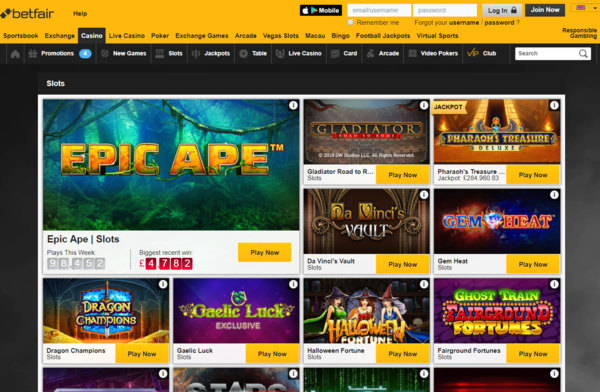 Betfair casino is powered by Playtech software, which is one of the best in the industry. Whilst a lot of companies work hard to bring in several software providers, Betfair have decided to use just one, which can limit the games on offer but by only using one provider, they will be able to offer up a download version of their casino client. It’s worth noting that you can also play games via their browser based instant play variant as well.

The range of games on offer is substantial to say the least, with over 400 titles in operation at any one time. What you will find with Betfair is that they are constantly adding and also removing games from their portfolio, which generally keeps things feeling fresh. The PlayTech coalition means they can provide a host of branded games such as Iron Man, Gladiator, Rocky and Thor, to name but a few.

Their table game section is actually quite substantial as well, with a great variety of games on offer including blackjack, roulette, Sic Bo, craps and baccarat. It’s worth noting that all these games can be accessed by their fully downloadable mobile casino app, available from the App Store for iOS and simply by visiting the casino in your smartphones browser for other formats. 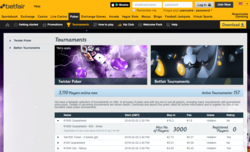 The poker room at Betfair is one that has seen some massive swings, if you pardon the pun. In the mid 2000’s in the boom of online poker you would see Betfair as one of the major players in the industry. However, the crash of the market saw a massive dip in players, as it did for most, and it took a while for Betfair to recover.

These days Betfair have definitely recovered from that, although it would be argued that they aren’t the force they once were, but to be honest, no one is. One of the reasons behind the companies recovery is their affiliation with the iPoker network. This is one of the biggest networks in the world and means they can access a massive array of games (Texas Hold’em, Omaha, Seven card Stud, Omaha Hi Lo and Seven Card Stud 8 or Better) along with a great player database for around the clock play.

The bingo section of the site is one that’s been thriving over the last few years and in that time have won several highly acclaimed awards for their troubles. You’ll be able to find a really good mix of games on offer including 75, 80 and 90 ball variants. Their all-new bingo app is another reason why they have succeeded with online bingo and the bonuses they have on offer are second to none. In fact, you can even pick up a £10 welcome bonus, which requires no deposit when you register a new account!

As you’d expect from one of the biggest gambling companies in the world, Betfair include a number of payment methods for their users. The most popular ones include Visa Debit cards, Skrill, Neteller, MasterCard, Bank Transfer, Western Union, WebMoney, Paysafecard, Cheque, Maestro and Click & Buy. The minimum deposit for each will range between £10 and £15 with no charges for any deposits.

Withdrawals will be free for all transactions apart from bank transfers that include a £5 surcharge. Withdrawal times will vary depending on your chosen method but will likely be between 1-5 working days.

Betfair have a number of ways in which you can get in touch with them should you have any issues. In fact, probably one of the most efficient ways of doing so is by using their social media outlets, as listed below: