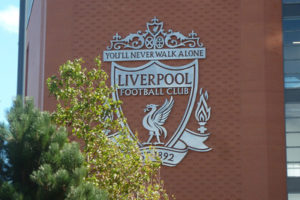 The top two in the table go head-to-head in the Premier League this Sunday, as Liverpool host Manchester City at Anfield. Who will be top of the league going into the international break? On the same day, London rivals Fulham and Arsenal meet at Craven Cottage.

There’s also a full fixture list in the EFL Championship, with all 24 clubs in action. After the midweek results, Leeds United, Middlesbrough and Sheffield United all sit joint top of the table on 22 points apiece.

Liverpool and Man City, who meet at Anfield this weekend, are joint top of the Premier League table at present. After seven games, both teams have won six and drawn one to sit on 19 points. The Citizens are top on goal difference, having scored a staggering 21 goals and conceded just three. Meanwhile, at the other end, the bottom three of Huddersfield Town, Cardiff City and Newcastle have yet to win a game this term.

The action in the Premier League gets underway on Friday night, with Brighton & Hove Albion and West Ham United locking horns at the Amex Stadium. Having picked up just one win all season, Brighton could do with all three points from this clash.

Since beating Manchester United 3-2 at the Amex back in August, the Seagulls have only picked up a mere two points. Meanwhile, West Ham, who lost their opening four in the Premier League, have beaten Everton and Man United in recent weeks.

Brighton are not an easy nut to crack on home soil, but West Ham will fancy their chances of returning to London with at least a point. The draw is available at 23/10 with bet365.

Both Man United and Newcastle are in poor form ahead of Saturday evening’s meeting at Old Trafford. However, Jose Mourinho’s Red Devils are the strong favourites to get the better of the winless Magpies at the weekend.

Man United have had a couple of weeks to forget: getting knocked out of the Carabao Cup by Championship club Derby County, picking up one point from two games in the Premier League and only managing a 0-0 draw with Valencia at Old Trafford in the UEFA Champions League.

Newcastle head to Manchester with just two points on the board from seven games, and we can’t see them getting anything at Old Trafford on Saturday. Take a punt on Mourinho’s men to win with a -1 goal handicap at 13/10 with BetVictor.

Fulham and Arsenal meet in a London derby at Craven Cottage in the early kick off in the Premier League on Sunday. The Gunners, who have won their last five in the league, make the short trip across the capital as favourites.

The Cottagers have found it tough going in the top flight up until now, claiming just one win from their opening seven. Arsenal lost their opening two, but Unai Emery’s men have won each of their last five in the Premier League, with their last two wins coming with clean sheets.

Arsenal have beaten both Everton and Watford 2-0 recently, and we fancy the Gunners to secure a hat-trick of 2-0 victories in the top flight at Craven Cottage on Sunday. The 2-0 away win is priced at odds of 10/1 (Betfred).

Mark Hughes’ Southampton welcome Maurizio Sarri’s Chelsea to St Mary’s on Sunday afternoon. The Blues have drawn their last two in the Premier League, so Sarri and his side will be eyeing up all three points from this one.

The Saints have won one, drawn two and lost four of their opening seven league matches so far. In contrast, the Blues have won five and drawn two, although both of those draws have come in their last two fixtures.

Chelsea should be too strong for Southampton on Sunday. Hughes’ troops will no doubt have a go on their own patch, but the Blues’ qualities should bear fruit in the end. Take a punt on the away side to win and both teams to score (12/5 at bet365).

Jurgen Klopp’s Liverpool and Pep Guardiola’s Man City do battle in the Premier League’s blockbuster match on Sunday afternoon. The winner of this one at Anfield will top the Premier League table during the international break. These two played out several thrilling games last term, let’s hope for more of the same this time around.

The Reds dropped points in the league for the first time last weekend, but Daniel Sturridge’s late stunner earned Klopp’s boys a 1-1 draw at Stamford Bridge. As for City, since drawing at Molineux, they have won four in a row in the Premier League, scoring 12 and conceding just one.

This heavyweight tussle could go either way at Anfield, but we’re backing Man City to leave Merseyside with a precious three points. The City win is available at 10/3 with Coral.

The Championship has been as thrilling as ever so far this season, with three sides at the top of the division after 11 games. Leeds are top on goal difference, level on points with Boro and Sheff Utd. A point behind are West Bromwich Albion, who go into this Saturday’s home game with lowly Reading on a six-game unbeaten run in the Championship. Expect plenty more thrills and spills in the second tier this weekend.

Marcelo Bielsa’s Leeds and Dean Smith’s Brentford square off at Elland Road in the early kick off in the Championship on Saturday. The league leaders will be on the lookout for another home win here.

Leeds had picked up one point from a possible six before sealing a priceless 1-0 victory at Hull City on Tuesday. Meanwhile, despite a strong start to their campaign, the Bees have fallen off in recent weeks, failing to win any of their last four in the Championship.

Leeds will be hoping to make home advantage count, especially after losing to Birmingham City in their previous home game. The Whites are priced at 13/10 with Betfair to take all three points from this clash.

Bolton Wanderers and Blackburn Rovers go head-to-head at the University of Bolton Stadium on Saturday evening. Despite losing at home for the first time in a league game in over a year on Wednesday, Tony Mowbray’s men head to Bolton as favourites.

The Trotters made an outstanding start to their Championship campaign, winning three and drawing one of their first four, but Phil Parkinson’s side have picked up just one victory from their last seven in the league. Blackburn, meanwhile, have won three, drawn six and lost two so far.

After losing at home to in-form Sheff Utd in midweek, Rovers will be desperate to hit back in this one. Take a punt on Blackburn to win 1-0 at 6/1 with BetVictor.

On Sunday in the Championship, Lee Johnson’s Bristol City and Jos Luhukay’s Sheffield Wednesday face off at Ashton Gate. The Robins are the bookies’ favourites in this one.

After winning four in a row, Bristol City have only managed to pick up two points from their last four. As for Wednesday, they have been in decent form of late, winning four, drawing three and losing just one of their last eight in the Championship.

This has the potential to be a close match at Ashton Gate, and we can see the pair cancelling each other out. Check out the draw and both teams to score at 4/1 at Betfred.