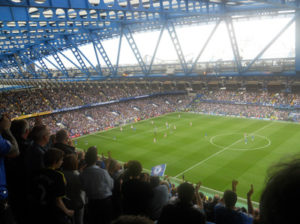 With the latest international break all done and dusted, Premier League and EFL Championship football is back this weekend. The action in England’s top flight gets back underway with the heavyweight clash between Chelsea and Manchester United at Stamford Bridge on Saturday afternoon. The Premier League weekend draws to a close when Arsenal entertain Leicester City on Monday night.

Meanwhile, in the Championship, high flyers Sheffield Wednesday and Middlesbrough lock horns at Hillsborough on Friday night while Blackburn Rovers host Leeds United at Ewood Park on Saturday afternoon. The standout game in the second tier is Saturday evening’s fixture between Derby County and Sheffield United at Pride Park.

After picking up a handy 0-0 draw with Liverpool, Manchester City were top of the table during the international break. The Citizens had the chance to take all three points late on at Anfield, but Riyad Mahrez fluffed his lines from the penalty spot late on. Things are very tight at the top, with Man City, Liverpool and Chelsea all on 20 points while Arsenal and Tottenham Hotspur both have 18 points on the board. At the other end, Cardiff City, Newcastle United and Huddersfield Town – who have all yet to win a game in the Premier League this term – make up the bottom three.

Maurizio Sarri’s Chelsea and Jose Mourinho’s Man United do battle at Stamford Bridge this Saturday afternoon. The Blues will go to the top of the table with a positive result on home soil, and the hosts are the clear favourites to pick up a win in this one.

Chelsea have made a strong start under Sarri, winning six and drawing two of their opening eight in the Premier League. As for United, after going four league and cup games without a win, the Red Devils came from two goals down to beat Newcastle 3-2 at Old Trafford in their last outing.

Mourinho lived to fight another day after Man United’s dramatic win over Newcastle, but we can see the visitors losing at the Bridge on Saturday. We like the look of Betfred’s 15/8 for Chelsea to win with a -1 goal handicap.

On Saturday evening, Jurgen Klopp takes his Liverpool side to the Kirklees Stadium to face David Wagner’s Huddersfield Town. The Reds will be on the lookout for their first win in five league and cup matches.

The Terriers have struggled so far this season, although they did pick up a good point at Burnley before the international break. Liverpool won their opening six games in the Premier League, but Klopp’s side have drawn their last two.

Having picked up back-to-back draws with Chelsea and Man City, the Reds will be eager to get back to winning ways in this one. The visitors should be too strong, so take a punt on BetVictor’s 15/2 for Liverpool to win 3-0.

At Goodison Park on Sunday, Everton welcome Crystal Palace to Merseyside. The Toffees will be eyeing up a hat-trick of league wins while Palace will be hoping to avoid a third straight Premier League loss.

Everton are slowly but surely finding their feet under Marco Silva, beating Fulham and Leicester City in their previous two games. Roy Hodgson’s Eagles, meanwhile, have lost five of their last seven in the Premier League.

Everton should make home advantage count on Sunday, with Silva’s men odds-on to claim a home win. There’s good value in bet365’s 3/1 for the home side to win and both teams to score.

The final Premier League fixture of the round takes place at the Emirates Stadium on Monday night as Unai Emery’s Arsenal take on Claude Puel’s Leicester. The Gunners will be going all out for a 10th consecutive win in all competitions.

Arsenal have been on a superb winning run over the past couple of months or so, picking up nine victories in a row across all competitions since losing 3-2 at Stamford Bridge in a Premier League match back in August. Leicester, meanwhile, have been pretty decent on the road so far, earning league wins at Southampton and Newcastle.

With the Gunners on fire at the moment, Arsenal should cruise to another victory on Monday. Ladbrokes are offering 27/20 for the London outfit to be winning at half time and full time in this one.

Chris Wilder’s Sheff United are the surprise leaders of the Championship. The Blades, who lost their opening two, have been on a remarkable run over the past couple of months, winning eight of their last 10 league matches. Hot on their heels are the likes of West Bromwich Albion, Leeds United and Middlesbrough. This Saturday, the league leaders travel to Pride Park to take on Frank Lampard’s Derby.

On Friday night in the Championship, Jos Luhukay’s Sheff Wednesday and Tony Pulis’s Middlesbrough meet in a tasty fixture at Hillsborough. These two sides are separated by just three points, with Wednesday in sixth and Boro in fourth.

The Owls have been in fine fettle of late, winning two and drawing two of their last four. A 2-1 win at Bristol City before the international break lifted Wednesday into the play-off places. In Boro’s last outing, Pulis’s troops were beaten 2-0 at home by in-form Nottingham Forest.

Despite their good run of results, Wednesday have drawn each of their last three Championship matches at Hillsborough. We fancy this to end in another stalemate, with bet365’s 23/10 for the draw worth having a punt on.

Tony Mowbray’s Blackburn entertain Marcelo Bielsa’s Leeds at Ewood Park in the Championship’s early kick off on Saturday afternoon. United, who have the joint best away record in the division, head to Lancashire as favourites.

Rovers, who finished runners-up in EFL League One last term, have made a competitive start to life back in the Championship. The Blue and Whites have won four, drawn six and lost just two of their opening 12. Leeds sit third, meanwhile, having picked up an impressive 23 points thus far.

Bielsa’s boys are unbeaten on their travels this season, and we can see them retuning to Yorkshire with all three points on Saturday. Betfair are offering the tempting price of 23/10 for the away team to prevail.

Lampard’s Derby entertain league leaders Sheffield United at Pride Park on Saturday evening. This is without doubt the standout fixture in the second tier this weekend. Will the Rams take the points, or can the Blades secure a fifth consecutive Championship win?

County have had a mixed bag of results under Lampard so far. After beating Man United on penalties at Old Trafford in the Carabao Cup last month, Derby have picked up just two points from three league games since. Sheff United are the in-form team in the Championship at present, picking up 13 points from a possible 15 since losing 1-0 at Bristol City last month.

This promises to be a fascinating encounter at Pride Park, which could go either way. However, we’re backing the table toppers to leave the East Midlands with another win. Sheff United to win 2-1 is priced at 9/1 with Coral.