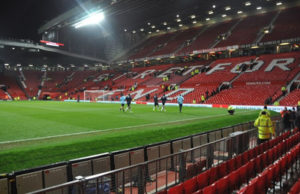 All four English clubs are in UEFA Champions League action in midweek, with Tuesday’s Manchester United v Juventus matchup at Old Trafford being the standout game of the round from an English perspective. Meanwhile, Liverpool host Red Star Belgrade on Wednesday. In the UEFA Europa League, Arsenal play Sporting Lisbon while Chelsea entertain BATE Borisov.

There’s a full fixture list in the EFL Championship in midweek as well, with seven games taking place on Tuesday night and five on Wednesday. High flying West Bromwich Albion lock horns with Derby County at The Hawthorns on Wednesday evening as the second tier continues to enthral.

Tottenham are the only English team left in the Champions League without a win this season while none of the other three have managed to win both of their European matches thus far. Juventus have maximum points in Group H as they make the trip to Manchester as favourites. Liverpool will be hoping to make home advantage count against Red Star, whereas Spurs and Man City both have winnable away games.

Jose Mourinho’s Man Utd welcome Massimiliano Allegri’s Juventus to Old Trafford for a heavyweight clash in Group H. Cristiano Ronaldo returns from a one-game ban to face his former club in Manchester and would no doubt love to put on a show at the ground where he achieved so much.

After cruising to a 3-0 away win at Young Boys, United were held to a frustrating 0-0 home draw by Valencia in their last Champions League encounter. The Old Lady, meanwhile, have beaten Valencia and Young Boys without conceding a single goal.

This will be a tough game for the Red Devils, and we can see Juve leaving England with all three points on Tuesday. Check out BetVictor’s top odds of 3/1 for Allegri’s troops to win to nil at Old Trafford.

Juventus to Win to Nil – 3/1 at BetVictor

Pep Guardiola takes his Man City team to Ukraine on Tuesday to face Paulo Fonseca’s Shakhtar at the Metalist Stadium. City travel to Kharkiv as the strong favourites to return to Manchester with all three points but the home side are a really tough nut to crack in front of their own fans.

Donetsk have taken two points from two games Group F, drawing 2-2 with both Hoffenheim and Lyon. Man City started with a shock 2-1 home loss to Lyon, but they responded well by beating Hoffenheim 2-1 in Germany last time out in Europe.

The Citizens, who thumped Burnley 5-0 in the Premier League at the weekend, should ease to a win in Ukraine. Have a punt on Guardiola’s men to win -1 at 11/10 with Betfair.

Having lost their opening two, Tottenham will be desperate for a win when they face PSV in Holland on Wednesday night. However, Eindhoven could also do with a win as they also have zero points to their name. Spurs won’t feel qualification is beyond them but in reality this may well be a battle to avoid the wooden spoon.

Mark van Bommel’s side lost 4-0 at the Camp Nou to Barcelona before falling to a narrow 2-1 home loss to Inter Milan. As for Spurs, they conceded two late goals to lose 2-1 to Inter in the San Siro in their opener. The Lilywhites were then beaten 4-2 by Barca at Wembley Stadium earlier in the month, with Lionel Messi producing a 90-minute football masterclass.

PSV will do their best to make life difficult for Spurs, but we fancy Mauricio Pochettino’s boys to secure a priceless victory on Wednesday. The Tottenham win is available at evens with bet365 and that looks good as we fancy they will get themselves back into top two contention.

Jurgen Klopp will be looking for a response from his players after their 1-0 defeat in Napoli last time out in Group C. Liverpool go into this one against Red Star at Anfield as the clear favourites with the bookies.

After a stunning win over Paris Saint-Germain at Anfield in their opening game, Liverpool could only follow that up with a 1-0 loss in Naples. Meanwhile, Belgrade held Napoli to a draw before crashing to a 6-1 defeat in Paris.

With a home game with Napoli and a trip to the Parc des Princes on the horizon, Klopp’s Reds must take maximum points from this one. This should be an easy victory for the hosts, so back Liverpool to be winning at half time and full time at 2/7 (bet365).

Arsenal and Chelsea both have six points out of six so far in this season’s Europa League and both will very much fancy they can go all the way in this competition. The Gunners travel to Sporting, who also have six points on the board in Group E. Meanwhile, the Blues entertain Belarusian outfit BATE at Stamford Bridge on Thursday night.

Unai Emery’s Arsenal make the trip to Portugal on Thursday to play Jose Peseiro’s Sporting at the Stadio Jose Alvalade. On paper, this looks a tricky trip for the Gunners.

Lisbon have secured wins over Qarabag and Vorskla Poltava to sit joint top of Europa League Group E with Arsenal. Emery’s men eased to a 4-2 victory over Vorskla at the Emirates before winning 3-0 at Qarabag.

Arsenal would probably take a draw now if offered, and we can see the Gunners picking up a precious point in Portugal. The draw and both teams to score is nicely priced at 18/5 with BetVictor.

Chelsea will be looking to make it nine points out of nine when they host BATE at Stamford Bridge in Group L on Thursday. Since the FA Community Shield defeat to Man City back in August, the Blues are unbeaten under Maurizio Sarri and progress has been surprisingly swift under the former Napoli boss.

Chelsea kicked off their Europa League campaign with a 1-0 win over PAOK in Greece, which they followed up with another 1-0 victory over MOL Vidi at the Bridge. BATE, meanwhile, have won one and lost one so far.

This should be a stroll in the park for Sarri’s Blues, and we’re expecting a big margin of victory for the hosts. Put some money on the 3-0 Chelsea win at 5/1 with Betfair.

All 24 sides are in Championship action on Tuesday, with Wednesday’s showdown at The Hawthorns between West Brom and Derby being the pick of the bunch. With the Baggies, Sheffield United and Leeds United all losing at the weekend, Middlesbrough head into this round of fixtures as league leaders. However, there are going to be many, many more twists and turns in the battle for automatic promotion before things are decided in May. At the other end, Paul Hurst’s Ipswich Town, who have picked up just one win so far, are rock bottom of the division.

Norwich and Aston Villa meet at Carrow Road on Tuesday for an intriguing fixture in the Championship. Dean Smith began life in the Villa dugout with a vital 1-0 home win over Swansea City last weekend, but this one in Norfolk will be a tough game for the Villans.

Daniel Farke’s Canaries are one of the in-form teams in the second tier at present, winning five of their last seven. As for Villa, despite their poor form of late, they are just three points behind Norwich in the table and know that a good run would catapult them into the battle for the play-off places – at least.

Last weekend’s win over Swansea at Villa Park was a crucial one, and we fancy Smith’s side to leave Carrow Road with a decent point on Tuesday. Back the draw at nice odds of 12/5 (BetVictor).

Darren Moore’s West Brom and Frank Lampard’s Derby square off at the Hawthorns for a tasty Championship matchup on Wednesday. These two sides are separated by just three points after both have made good starts to their campaigns.

The Baggies have looked very strong in recent weeks, although last Saturday’s surprising 1-0 loss at Wigan Athletic was no doubt a setback for Albion. The Rams secured an excellent 2-1 home win over high flying Sheff Utd last weekend, lifting themselves up to fifth in the process.

West Brom have been exceptional at home of late, winning each of their last five at The Hawthorns in the Championship. Our money is going on the home win (21/20 at Coral) on Wednesday evening.