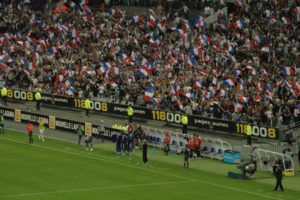 The UEFA Nations League continues on Monday and Tuesday, with a number of big games taking place. England make the trip to Seville to play Spain on Monday while the Republic of Ireland and Wales lock horns in Dublin on Tuesday.

The standout fixture of the round is the blockbuster League A, Group 1 matchup between giants France and Germany at the Stade de France on Monday evening.

With several countries looking for promotion and a number of teams seeking survival from relegation, the Nations League is starting to take shape. Spain have a chance to book their place in the finals as they take on England in Seville on Monday. Meanwhile, Ireland and Wales do battle in an important game in League B, Group 4 whereas Northern Ireland could be relegated to League C if they lose to Bosnia & Herzegovina on Tuesday.

Erik Hamren’s Iceland have made a woeful start to their campaign, losing 6-0 to Switzerland and 3-0 to Belgium. The Icelanders will be hoping to restore some pride in League A, Group 2 when they entertain the Swiss in Reykjavik on Monday.

Switzerland were outstanding against Iceland in St Gallen last month, with six different players getting on the scoresheet in the rout. However, in their second game, Vladimir Petkovic’s team were beaten 2-1 by the Belgians in Brussels.

This is a big fixture for Iceland, but we can see Switzerland leaving the Icelandic capital with all three points. BetVictor have the away win priced at 4/5.

Gareth Southgate takes his England side to the Estadio Benito Villamarin in Seville on Monday to play Spain in League A, Group 4. La Furia Roja have one foot in the Nations League Finals after picking up six points from two games.

Spain have looked the real deal under Luis Enrique so far. The Spaniards have dominated this group, beating England 2-1 at Wembley Stadium before smashing Croatia 6-0 in Elche. As for the Three Lions, they picked up a handy 0-0 draw at an empty Stadion Rujevica in Rijeka on Friday night.

Spain, who thumped Wales 4-1 in a friendly in Cardiff on Thursday, should see off the English with ease on Monday. BetVictor are offering 13/8 for the hosts to be winning at half time and full time.

Robert Prosinecki’s Bosnia host Michael O’Neill’s Northern Ireland at the Stadion Grbavica on Monday. The Bosnians will take a giant leap towards promotion to League A with a win over the Irish in this one. Meanwhile, defeat for Norn Iron will leave them on the brink of relegation to League C.

Bosnia have made a strong start to their Nations League campaign, winning two out of two thus far. After a 2-1 win in Belfast, the Bosnians beat Austria 1-0 in Zenica. Meanwhile, O’Neill’s side lost 1-0 to the Austrians after falling to a narrow defeat to Bosnia at home.

Norn Iron need the points, but we can see Bosnia cruising to victory on home turf on Monday. Back the hosts to win -1 at 9/5 (Betfair).

Didier Deschamps’ France and Joachim Low’s Germany do battle in a mouth-watering match at the Stade de France on Tuesday. A win for the 2018 FIFA World Cup winners would put them within touching distance of the Nations League Finals.

The French started their campaign with a battling 0-0 draw with the Germans at the Allianz Arena in Munich last month. The world champions then followed that up 2-1 home win over Netherlands.

This one could go either way at the Stade de France, so a draw seems a likely outcome. Betfred are offering the tempting odds of 11/4 for this to end in a stalemate in France.

Martin O’Neill’s Republic of Ireland welcome Ryan Giggs’ Wales to the Aviva Stadium in Dublin on Tuesday evening. The Irish will be looking for some revenge following last month’s heavy defeat to the Welsh in Cardiff.

Wales were superb at the Cardiff City Stadium a month back, with Tom Lawrence, Gareth Bale, Aaron Ramsey and Connor Roberts on the scoresheet in the emphatic 4-1 win over Ireland. However, the Dragons only managed to follow that up with a 2-0 reverse in Denmark.

This is a big game for both teams, with Ireland desperate to make home advantage count. However, we fancy the pair to cancel each other out in Dublin. Check out the 1-1 draw at decent odds of 5/1 with Betfair.

In Nations League B, Group 1 on Tuesday, Andriy Shevchenko’s men could be promoted to League A with a win over Jaroslav Silhavy’s Czech Republic. The Ukrainians are fancied to make it nine points from three games.

Ukraine have picked up back-to-back wins over the Czechs and Slovakia. After scoring late to win 2-1 in Hradiste, an Andriy Yarmolenko penalty gave the Ukrainians a 1-0 home win over Slovakia.

Ukraine will back themselves to make it nine points from a possible nine with another win on Tuesday. We like the look of the home team to come out on top with a 2-0 victory at odds of 7/1 with Betfred.